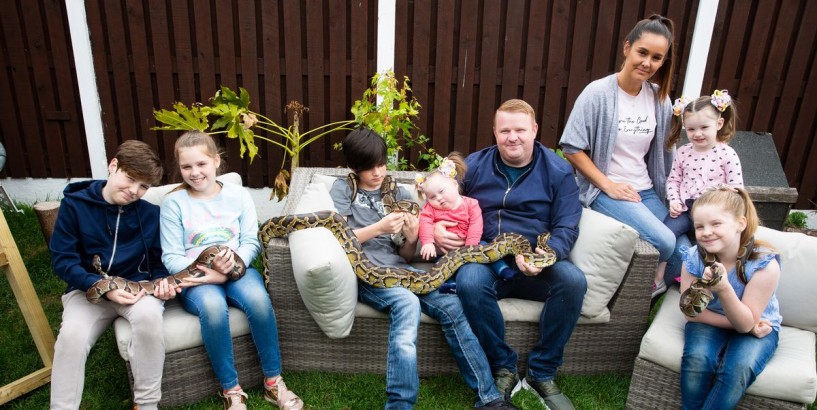 Mirror newsletter - all the biggest stories in one email

His barn owl, meerkats, hedgehogs, Burmese pythons, giant cockroaches and others are registered for therapy visits to elderly homes.

Scott, also dad to Jake, said: “My youngest Megan, who has Down’s syndrome, loves the snakes but she is too heavy handed.

“If it is a sunny day, I allow the snakes to roam free in the garden and bask in the paddling pool whilst the children play. 21 month old Megan with three of the pythons The dad-of-six insists it is “totally safe” to let the snakes – up to 12ft long – slither around the backyard as his young children Chloe, 11, Ellie-Mai, eight, Emily, three, and 21-month-old Megan play. Pictured: Sisters Ellie-Mai, 8, Chloe, 11 and Emily, 3 and a pair of baby meerkats on their heads

“But I’d never leave them unattended as they could constrict any of them at any time. We have got cute fluffy guinea pigs, rabbits, meerkats, ducks and reptiles including geckos, lizards and snakes. Robert and Rosie the skunk are inseparable.

"We have 14 snakes including pythons, corn snakes, a false water cobra, Baron’s racer and western hognose – they are harmless. Robert, 12, with his skunk Rosie Scott said: “The pythons could constrict you at any moment but I look after them and I don’t think it would happen". Pictured: The pet dogs and lizards share the house (Image: Caters News Agency)

“The pythons could constrict you at any moment but I look after them and I don’t think it would happen.” The family live in a five-bedroom house in Kirkby, Merseyside, with the animals – which cost £400 a month to care for.

Scott, who runs Party Central Entertainments, said the animals become a good talking point for the elderly, and at prisons where they are used as a way to bring fathers and sons together on visits. Chloe, 11, with their barn owl (Image: Caters News Agency) Top news stories from Mirror Online