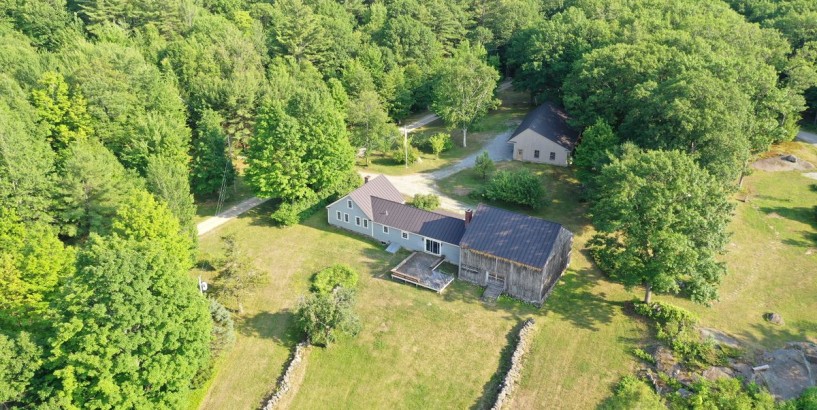 Locals in 'tight-knit' Bradford, New Hampshire, had no idea she was in the getaway spot that officials said she purchased in December for $1 million in cash Share Danya Bazaraa Senior News Reporter 12:11, 3 JUL 2020 The property where Ghislaine Maxwell was arrested by the Federal Bureau of Investigation (FBI) (Image: REUTERS)

Ghislaine Maxwell was 'hiding' out in a luxury country mansion and 'living a life of privilege' before she was finally arrested, it has emerged.

Her timber-framed home in New Hampshire is perched on 156 acres of pine and oak forests and has dramatic views of Mount Sunapee's foothills.

But it is secluded enough to have kept her out of eyeshot of tight-knit locals.

It was not until Thursday that other residents of this rural corner of New England knew her whereabouts, after FBI agents arrested her.

But the FBI had been monitoring her movements as their investigation progressed before swooping in on her 'stylish' location.

The FBI scorned her choice of getaway spot in the home that officials said she purchased in December for $1 million in cash. Her timber-framed home has dramatic views of the hills (Image: REUTERS)

The Independent reports that William Sweeney, assistant director in charge of the FBI’s New York Field Office, said at a press conference: "We have been discreetly keeping tabs on Maxwell’s whereabouts as we worked this investigation.

"More recently, we learned she had slithered away to a gorgeous property in New Hampshire, continuing to live a life of privilege while her victims lived with the trauma inflicted on them years ago."

Maxwell's home, identified to Reuters by a law enforcement source, has a narrow and treed-in half-mile dirt driveway with "No Trespassing" signs, obstructed by a padlocked metal fence. It is secluded enough that locals had no idea she was there (Image: REUTERS) The home is surrounded by forests (Image: REUTERS)

A real estate listing said the house has cathedral ceilings, a floor-to-ceiling fieldstone fireplace, and a wall of glass.

A stone with the words "Tucked Away" carved into it stands near the gate.

Locals said they were surprised Maxwell chose their town and had no idea she had been there. Prosecutors allege Maxwell lured girls for Epstein from 1994 through 1997 (Image: FilmMagic) Officials said she purchased the property in December for $1 million in cash (Image: REUTERS)

"I had no clue she was there," said Laurie Colburn, 53, whose home is within a mile of Maxwell's compound on the outskirts of Bradford, a town of less than 2,000 people defined by its white colonial homes, horse farms, stone walls and a historic covered bridge.

"Goes to show you, you don't always know who your neighbors are.''

"I'm surprised, because this is a small, quiet town. But I guess that makes it a good place to hide,'' said Jenna Cook, 18.

She and other residents said they had never seen Maxwell in town. Top news stories from Mirror Online