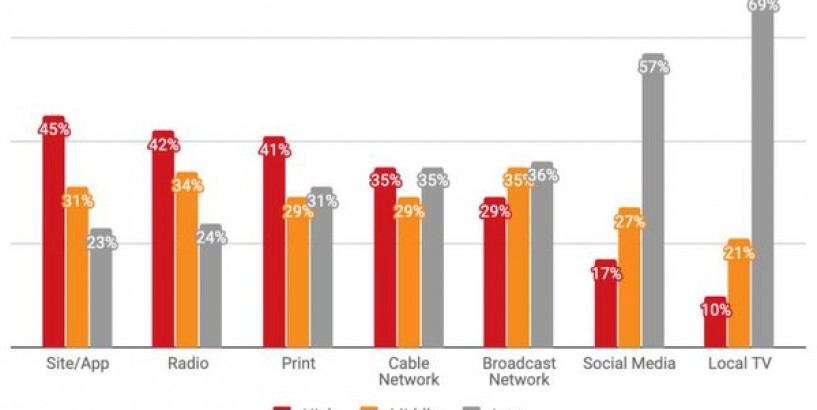 by Joe Mandese @mp_joemandese , 7 hours ago Turns out the biggest factor influencing the outcome of elections isn't the economy -- it's stupidity. And the No. 1. reason for it is the dissolution of professional journalism and the growth of -- how shall I say this -- somewhat less rigorous sources of validated information.

It has been a progression that began with the shift toward digital media, and the fact that anyone could publish a site, a blog, or a social media post, but according to an exhaustive study released this morning by the Pew Research Center, more Americans get their political and/or election news from a website, app or social media than from traditional journalistic media like TV, radio or print.

Even more alarming, the analysis of nine months of national polling on the subject found that Americans with the lowest political knowledge depend the most on social media.

Most alarming of all is the percentage of Americans who reported hearing about conspiracy theories that the COVID-19 pandemic was intentionally planned by powerful people who also depend on social media and/or digital publishing sites and apps as their source of political and/or election news.

"About a quarter of U.S. adults who get most of their news through social media (26%) say they have heard 'a lot' about this conspiracy theory, and about eight-in-ten (81%) have heard at least 'a little' – a higher share than among those who turn to any of the other six platforms for their political news," the Pew report notes.