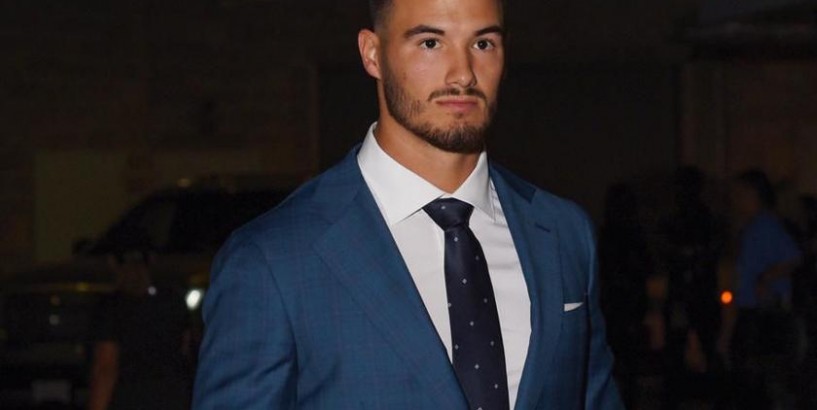 A significant and almost certainly disproportionate amount of the blame for the Bears offensive debacle last Thursday night has been laid at the feet of Mitch Trubisky, and meeting the media Wednesday for the first time since last Thursday night, he appeared perhaps a tad shell-shocked by it all.

“It was a long, weird weekend after playing on Thursday and then just sitting on that for a couple days.

“Got to think about it a lot and see what went wrong.”

The Bears young QB seemed a bit quieter and more laid back Wednesday than he has been in the past, and perhaps maybe even a bit less scripted.

Which may be an interesting issue to delve into.

People keep asking, “What about Trubisky’s confidence, how is he going to bounce back?

“What are (Matt) Nagy and (Dave) Ragone doing to make sure he doesn’t get too down?”

Is that really the issue with Trubisky at this point?

Trubisky talks a lot about what he and his offense are capable of as a team, and has often expressed excitement about what that might be. But I’ve never heard him in the same neighborhood with cocky or arrogant.

At the same time, he has certainly never appeared timid, uncertain or worried about whether he can get the job done or not at quarterback.

But what I do worry about is how often he tends to sound like he’s reading from a script or answering questions with coach-speak that almost sounds rehearsed.

How well do we know the real Mitch Trubisky?

Do we know him at all?

Asked today if he was worried about facing Vic Fangio this Sunday because of how well he knows Mitch and the Bears offense, Trubisky replied, “We gotta mix it up a little bit.

“You gotta do some things that he won’t expect, and just try to keep him off balance. I think if all 11 guys in our offense are doing our jobs, then the game’s going to go the way that we want it.

“We want to dictate the tempo, how they’re reacting to us and just do things that he won’t expect, necessarily.”

Maybe I’m overthinking this but does that sound like the answer you’d expect from one of the less experienced 25-year old quarterbacks in the league, or something he heard his coach say?

Pushing me further down this path is there were two different occasions today during his 12 minutes with the media when Trubisky looked to a team staff member before answering questions.

More from this section +2 'Undisciplined football': Broncos fumbling at an alarming rate through two games Healthy and off to a strong start, Packers' Bryan Bulaga aims for full, top-flight season Hub Arkush: Maybe it's time to just let Mitch be Mitch I can’t remember ever seeing that from a Bears player before.

Getting inside a 25-year-old’s head is harder than playing quarterback in the NFL, and this much I’m sure of: whatever may be holding Trubisky back isn’t physical.

Listen to Trubisky’s answer when asked what might have been good about last Thursday night.

“Yeah, um, I feel good about the way I threw it and not all the decisions, but the ball felt great coming out of my hand.”

Matt Nagy pretty much echoed that both Monday and Wednesday.

As the NFL’s second-leading rushing quarterback in 2018, while compiling a 95-plus passer rating, Trubisky has shown us he has all the physical tools necessary to succeed.

Clearly it is field generalship everyone is looking for from him now, and I can’t escape the feeling after observing him today that maybe instead of constantly picking apart what he needs to learn, what he needs to do better to take the next step, maybe it’s just time to let Mitch be Mitch?

Nagy and Ryan Pace talk constantly about the culture they’ve built and are building, and the two things Nagy preaches more than anything are “the game is supposed to be fun — we have to have fun,” and of course, “be you!”

Mitch Trubisky doesn’t appear to be having a lot of fun right now, and maybe none at all.

Is it possible a big part of that is Nagy and company are so focused on conjuring up a franchise quarterback in their quarterback lab that Trubisky isn’t being allowed to “be you?”

This article originally ran on profootballweekly.com .