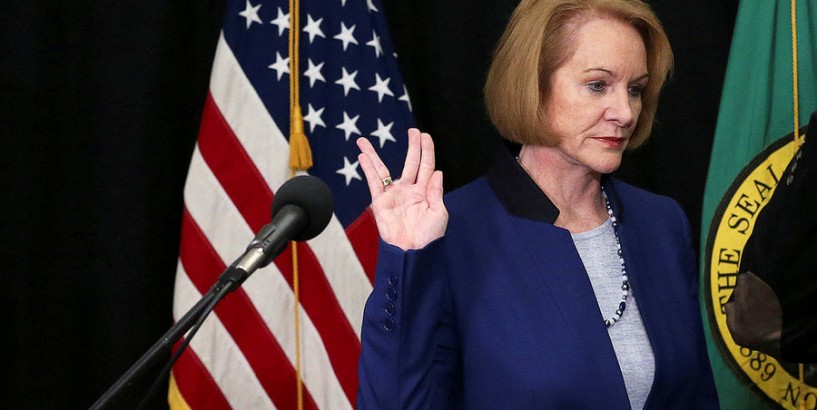 Two months ago, the United States’ first case of COVID-19 was confirmed just north of Seattle. That discovery set the Emerald City into uncharted waters. The pandemic’s double whammy on public health and the economy has been akin to an earthquake, shaking Seattle’s foundations.

To Ms. Durkan, getting the local response right isn’t just about accountability. Seattle is where she grew up as one of eight children, where she sold linens at JCPenney, where she graduated from law school.

“I love this city to my bones. This is so hard,” she says. “You know it’s going to have such deep, long-term consequences.”

Along with Washington state Gov. Jay Inslee, and King County Executive Dow Constantine, she’s determined to rise above blame-game politics and “speak in one voice as one government,” as she said in a press conference March 11.

“We’re a gritty city. We come back from adversity,” Ms. Durkan says. “But this one is going to test everyone’s will, and everybody’s mettle.”

Seattle It was Monday, March 2, when Mayor Jenny Durkan took the call at her Seattle home. On the line was Harvard-trained epidemiologist Trevor Bedford, who had caught the mayor’s attention with an ominous tweet two days earlier about his Seattle lab’s tracking of the new coronavirus.

Dr. Bedford had connected the genetic dots between the first U.S. coronavirus case – a man who tested positive Jan. 20 after returning from Wuhan, China, to Snohomish County north of Seattle – and a teenager who tested positive in the same county on Feb. 28. “This strongly suggests that there has been cryptic transmission in Washington state for the past 6 weeks,” tweeted Dr. Bedford.

Ms. Durkan urgently tracked down Dr. Bedford, who studies infectious diseases at Seattle’s Fred Hutchinson Cancer Research Center, to dig into his predictions. Why did they depart so starkly from what government health officials were reporting?

“His modeling, frankly, was very different from what public health was telling me,” Ms. Durkan recalls.

As the former U.S. attorney listened carefully to the evidence, the shocking revelations sank in.

“After talking with him, there was little doubt in my mind that the modeling was accurate,” she recounts, a belief other top experts would confirm. “We aren’t dealing with five cases. We are dealing with hundreds of cases, and our time to act was yesterday.”

She sketched out the math in a chart on a piece of paper, one she has carried ever since. “Over 70,000 cases,” she thought, “ in six weeks.”

She pauses. “It was one of the most sobering moments of my entire life.”

The next day, at 1:33 pm, Ms. Durkan signed a proclamation of civil emergency for Seattle – the blue-collar town where she’d grown up as one of eight children, where she’d sold linens at JCPenney and later graduated from law school. The city she loves.

Career’s toughest challenge Two weeks later, on St. Patrick’s Day, Ms. Durkan, the granddaughter of an Irish Catholic immigrant, sits virtually alone in her 7 th floor office suite, wearing a shamrock pin. Sunshine glints off the nearby skyscrapers, the deserted streets, and, a few blocks away, the waters of Elliott Bay.

The lobby of City Hall, adorned with a huge, gold seal of Chief Seattle, is eerily empty. Her lone assistant apologetically requests that all the mayor’s visitors first wash their hands, and remain several feet apart from her.

But even at a distance, Ms. Durkan’s gregarious warmth, quick wit, and no-nonsense demeanor comes through.

Ann Scott Tyson/The Christian Science Monitor Seattle’s normally bustling 4th Avenue, outside City Hall, is empty on March 17, 2020. Mayor Jenny Durkan signed a proclamation of civil emergency on March 3 amid the coronavirus crisis. “Thanks for coming in,” she greets this reporter, raising one hand and making a “V” with four fingers in a Vulcan salute, popularized by Spock in “Star Trek.” I bungle the return salute, which, perhaps aptly, means: Live long and prosper. “It takes practice!” she says, flashing a smile.

The heaviness of the moment, though, is unmistakable, as Ms. Durkan presides over a city that has gone from boom to virus-inflicted bust virtually overnight. For the past decade, Seattle has been one of the fastest-growing cities in the country. But the double whammy of the pandemic on public health and the economy is akin to an earthquake, shaking the Emerald City’s foundations.

Asked whether this is the biggest challenge of her career, Ms. Durkan doesn’t hesitate. “No question about it, by a magnitude of several factors,” she says. “I don’t think that our country has dealt with a more impactful and complicated and widespread crisis in many generations.”

In response, Ms. Durkan is relying not only on top scientists but also her own, well-honed political instincts to guide Seattle through today’s uncharted waters. The daughter of a legendary Washington state senator and lobbyist, she learned to stand her ground by tussling with her siblings. When she graduated from the University of Washington Law School in 1985, she recalls her mother commenting: “Finally, someone is going to pay you to argue.” But she also learned the art of compromise and teamwork.

On the Sunday after Dr. Bedford briefed her, she huddled for two hours with Washington state Gov. Jay Inslee, King County Executive Dow Constantine, and other senior officials to ensure they were on the same page.

“Once we heard the science, I don’t think there was anyone in the room that didn’t feel the government had to make some significant steps to reduce public gatherings,” she says. “It’s not either-or. It’s really more of a dial,” she says. “You try the first step, and if that seems not to be working, you have to accelerate through the dial pretty quickly.”

On March 11, Ms. Durkan stepped before the cameras flanked by Governor Inslee, Mr. Constantine, and other officials to unveil that first step – a ban on gatherings of more than 250 people. But first, she set the stage. “One of the most important things we can do, according to the World Health Organization, is to speak in one voice as one government,” she said. After a crisp few words, she elbow-bumped with the governor, made the Vulcan salute, and stepped aside.

“This is something Mayor Jenny Durkan was born to do,” says a longtime Seattle journalist who spoke on condition of anonymity. “She’s good at centrist, Democratic government.”

The Washington state team was determined, as Ms. Durkan said later, to rise above the pull of blame-game politics and “fight the virus instead of each other.” In contrast, a few days earlier, as Vice President Mike Pence visited the state to bring vital emergency aid, President Donald Trump referred to Governor Inslee as “a snake” for alleging the administration had not “stuck to the science.”

Robust local leadership has emerged in part amid a weak federal government response, analysts say. There was “a lack of strong leadership from the feds,” says Ann Marie Kimball, professor emeritus of epidemiology at the University of Washington. Moreover, she says, “all epidemics and pandemics are really local, so local officials are in the best position to tailor [the response] … and they speak with a voice we recognize.”

Americans expressed more confidence in their state governments than in President Trump or the federal government in handling the coronavirus, according to a Wall Street Journal/NBC News poll released this week.

A city unbowed Carrying her hand-sketched chart of future cases, Ms. Durkan has no time to waste on infighting. She knows Seattle and Washington are only about 11 days behind Italy – one of the world’s hardest-hit countries – on the steeply rising COVID-19 curve.

“Every time Italy takes a step because they have reached a crisis point, it sends a signal to us,” Ms. Durkan says. “We should take that step now.”

Yet state and local resources only go so far. What is keeping her awake at night is the lack of protective equipment such as gloves, masks, and gowns for Washington’s first responders and medical personnel. Last Friday, she visited Seattle’s Harborview Medical Center, only to see medical workers reaching into almost empty bins of masks.

“If our workers get sick, our health care system fails,” warns Ms. Durkan, who says she spent dozens of hours last weekend trying to help secure more protective equipment. Washington has already received some supplies from national reserves, but is awaiting approval to get another 180,000 masks and face shields and 65,000 respirators. Hospital surge capacity is also inadequate without federal help, she says.

More shelters for Seattle’s most vulnerable population, particularly some 11,000 people experiencing homelessness, are another critical need. And given the expectation hundreds of thousands of people will lose their jobs, “we need something bigger than the New Deal to put money in the pockets of workers” and supplement private, local, and state relief efforts, Ms. Durkan says. For example, Amazon executives pledged $5 million for small firms such as restaurants and food trucks in the vicinity of the company’s downtown Seattle headquarters.

Seattle’s vibrant patchwork quilt of neighborhoods is suffering, she says, and she takes such losses personally. She remembers growing up during the “Boeing bust” of the 1970s, when the airplane maker cut more than 40,000 workers. In her friends’ neighborhoods, “there was empty house after empty house, and dandelions pushing up,” she recalls.

“I love this city to my bones. This is so hard,” she says. “You know it’s going to have such deep, long-term consequences.”

But Ms. Durkan also has a tough streak that Seattle needs right now. After college, she moved to an Alaskan fishing village and taught English for two years. Then she worked as a baggage handler and dues-paying Teamster to help her pay for law school. The first openly gay U.S. attorney, and the first female Seattle mayor for nearly a century, she speaks her mind and tells it like it is.

“We’re a gritty city. We come back from adversity,” she says. “But this one is going to test everyone’s will, and everybody’s mettle.”