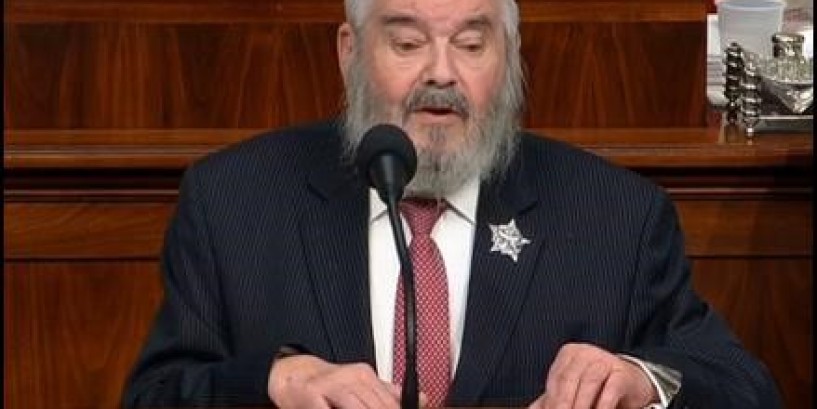 Rep. Max Rose (D-N.Y.) offered his condolences: “Heartbroken to hear Rabbi Romi Cohn passed away from COVID-19. Rabbi Cohn lived an incredible life of service, helping 56 families escape Nazi tyranny. … May his memory be for a blessing.” By JNS

A rabbi who survived World War II and the Holocaust and in January delivered the opening prayer in the U.S. House of Representatives died on Tuesday—14 days after his 91st birthday—after being hospitalized with COVID-19.

Yeshiva World News first reported the death of Rabbi Avraham Hakohen “Romi” Cohn as a result of complications due to the coronavirus.

Cohn was born in 1929 in Pressburg in what was then Czechoslovakia. In 1942, when the Nazis invaded, his parents managed to smuggle him over the border to Hungary. Cohn attended the Pupa Yeshiva, the elite Torah university at the time.

After the Nazis invaded Hungary two years later, he returned to Czechoslovakia to join the underground. He was just 16 and became instrumental in saving 56 families during the Holocaust. He was later awarded the Silver Star Medal of Honor in recognition of his valor.

Cohn wrote a book about his experiences, The Youngest Partisan .

His mother, two sisters and two brothers perished in a concentration camp during the Holocaust.

In 1950, he left Eastern Europe for North America—first to Canada and eventually to Brooklyn, N.Y., where he met his wife, Malvine.

He became a rabbi and a mohel who has made a point to train young mohels as well. Cohn was the author of Bris Avraham Hakohen , an internationally recognized text on ritual circumcision, and served as chairman of the American Board of Ritual Circumcision.

He published The Ribnitzer Rebbe , which tells the story of his mentor, Rabbi Chaim Zanvil Abramovitz.

Cohn was also a real estate developer, beginning work in the construction industry when he got to New York. He headed a company that went on to build 3,500 homes in Staten Island.

In recognition of his service to the community, Wagner College on the island awarded him an Honorary Doctor of Humane Letters.

“As a young boy of 13 years, I was condemned to be dead, to be murdered, along with my entire family, and including my 3-year-old little sister, by one evil man, may his name be erased forever,” said Cohn as part of his Jan. 29 opening prayer before the House of Representatives, commemorating the 75th anniversary of the liberation of the Auschwitz concentration and extermination camp.

“But my life was spared; I was saved my Father. By you, oh Lord, the Father of the Universe, who brought me to the shores of this beautiful country, the United States of America, the land of the free, where I found a safe and new home.”

He then acknowledged the country, president, vice president, Congress and his representative, Rep. Max Rose (D-N.Y.), who was the one who invited him as guest chaplain.

“Heartbroken to hear Rabbi Romi Cohn z”l passed away from COVID-19. Rabbi Cohn lived an incredible life of service, helping 56 families escape Nazi tyranny. 2 months after he led the House in opening prayer, I hope you’ll join me in praying for him & his family,” tweeted Rose, adding the Hebrew translation of “May his memory be for a blessing.”

Rabbi Cohn lived an incredible life of service, helping 56 families escape Nazi tyranny. 2 months after he led the House in opening prayer, I hope you’ll join me in praying for him & his family. יהי זיכרו ברוך pic.twitter.com/aIFpBnRNWC