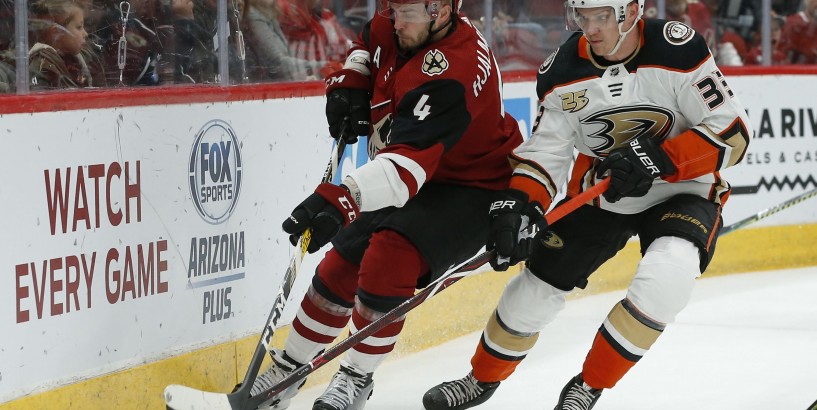 GLENDALE, Ariz. (AP) — Vinnie Hinostroza's first career hat trick sent the surging Arizona Coyotes to a 6-1 win over the Anaheim Ducks on Thursday night. Hinostroza scored his third goal of the night with 51 seconds left, and hats came flying out of the crowd onto the ice.

Jason Demers added a goal and an assist for the Coyotes, who have won 10 of 12. Oliver Ekman-Larsson and Mario Kempe also scored, and Alex Goligoski had two assists.

Arizona's victory coupled with Minnesota's loss to Dallas moved the Coyotes three points ahead of the slumping Wild for the second Western Conference wild card. Both teams have 11 games remaining.

Darcy Kuemper stopped 37 shots for his 13th win since Feb. 9, and was credited with an assist.

Jakob Silfverberg scored for Anaheim, which had won four of six.

The Coyotes scored two power-play goals in a game for the fourth time this season, and improved to 26-1-1 when leading after two periods.

Ekman-Larsson's goal was his 11th, and the Coyotes' 15th short-handed this season. He took a pass from Brad Richardson and flipped a shot over the glove of Ducks goaltender Ryan Miller at 17:25 of the first period.

Demers scored with 50 seconds left in the period for a 2-0 lead when his wrist shot beat Miller stick side for Demers' first goal since Nov. 15. After that night, he missed the next 47 games with a knee injury.

The Ducks made it 2-1 just 58 seconds into the second on Devin Shore's shot that deflected off the stick of Silfverberg and past Kuemper.

Demers perhaps inadvertently helped Hinostroza score his 13th goal of the season at 4:15 of the second. He collided with Hinostroza as he worked the puck up the ice, and after Hinostroza emerged from being sandwiched between Demers and a Ducks player, his shot went between Miller's legs for a 3-1 Coyotes lead.

NEWSLETTERS Get the Sports newsletter delivered to your inbox We're sorry, but something went wrong Sports news, no matter the season. Stop by for the scores, stay for the stories. Please try again soon, or contact Customer Service at 1-800-872-0001. Delivery: Daily Invalid email address Thank you! You're almost signed up for Sports Keep an eye out for an email to confirm your newsletter registration. More newsletters Hinostroza made it 4-1 when a shot by Demers caromed out to him for a successful slap shot at 17:49 of the second. Kempe's goal came as the puck crossed the goal line just before the final buzzer.

NOTES: Arizona Diamondbacks OF David Peralta dropped the ceremonial first puck before the game. ... The 15 short-handed goals tie a franchise record that dates back to when the Coyotes were the original Winnipeg Jets in 1988-89. ... F Richard Panik played in his 400th NHL game. ... Silfverberg has a goal in three consecutive games and a point in seven straight. ... The Ducks served 10 minutes in penalties.

Ducks: At the Colorado Avalanche on Friday night.