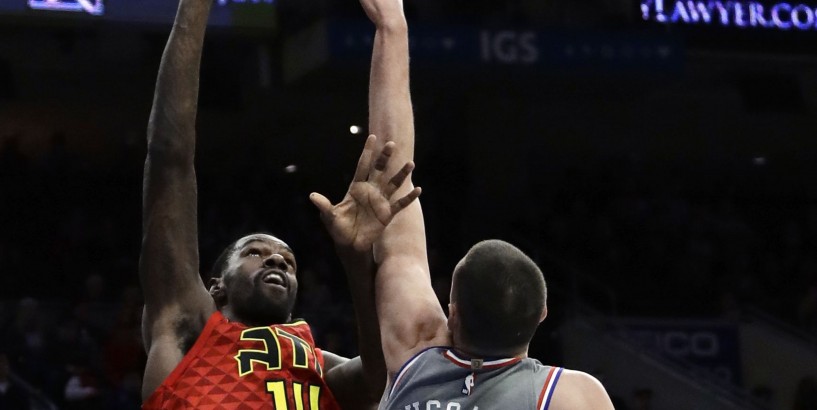 PHILADELPHIA (AP) — John Collins hit a fadeaway jumper with 25 seconds left and Atlanta hung on when Philadelphia flopped on its final plays to lead the Hawks to a 123-121 win over the 76ers on Friday night. Jimmy Butler was fouled on a drive and had a chance to tie the game with 2.4 seconds left. Butler, an 86 percent free-throw shooter, clanged both shots to waste the chance at the tie. But Wilson Chandler slipped under the basket on the second miss and had a gimmie tip-in at the horn but failed to convert, leaving the Sixers stunned as they trudged off the court.

Butler led the Sixers with 30 points and Ben Simmons had 23 points, 15 assists and 10 rebounds.

JJ Redick, who missed the last two games with a sore back, led a comeback in the fourth with a pair of 3-pointers that tied the game each time. The game turned into a 3-point shootout late — the teams combined for 23. TJ McConnell put the 76ers ahead by one with 2:39 left. Huerter buried a 3 to tie it at 121.

Butler had his first major miscue when he lost the ball on a drive down the lane that was recovered by Atlanta. Collins hit the jumper and that was enough for the lowly Hawks (13-29) to send the Sixers to just their fourth home loss of the season.

The 76ers struggled with All-Star center Joel Embiid out with a sore ankle suffered in a loss to Washington on Wednesday night. Embiid tested his ankle on the court as late as he could. He was one of the final players to leave the court during warmups and shot long jumpers wearing "Trust the Process" sneakers. His presence was missed — Embiid leads the 76ers with averages of 26.9 points and 13.4 rebounds in 40 games.

Mike Muscala started for Embiid and kept the 76ers in the game with 11 points in the first half.

Hawks: Coach Lloyd Pierce made a homecoming of sorts after spending five years on Brett Brown's staff with the Sixers. Pierce said he owed Brown so much for helping him become a head coach. Brown said Pierce was one of his first hires as "The Process" began in 2013. "I am connected in sort of deep ways to that staff," Brown said.

76ers: Brown said G Markelle Fultz (thoracic outlet syndrome) is undergoing therapy in Philadelphia and may rejoin the team soon. Justin Patton (broken foot) could return in early February. Zhaire Smith (foot) has individual workouts but has not yet practiced with the team this season.

The 76ers will retire Moses Malone's No. 2 in a halftime ceremony of the Feb. 8 game against Denver. The Sixers also will unveil a Malone sculpture on their Legends Walk at team headquarters in New Jersey.

Malone was a three-time NBA MVP, 13-time All-Star (12 times in NBA, once in ABA), Hall of Fame inductee and member of the 50 Greatest Players in NBA history. In 1983, he helped the Sixers roll through the playoffs and sweep the Lakers in the finals — the last time they won a championship.

Before the playoffs that year, Malone was asked about the team's prospects. He is remembered as much for his answer to that question as he is for his dominance on the court.

Late in the third, Alex Len planted an elbow in Butler's face on the block that knocked the four-time All-Star to the ground. Butler remained seated and appeared to exchange words with Len. McConnell yanked Butler by the right shoulder and dragged him about 15 feet to the free-throw line to keep the tension from escalating. The refs threw it to New York for a review and Len was hit with a flagrant foul.