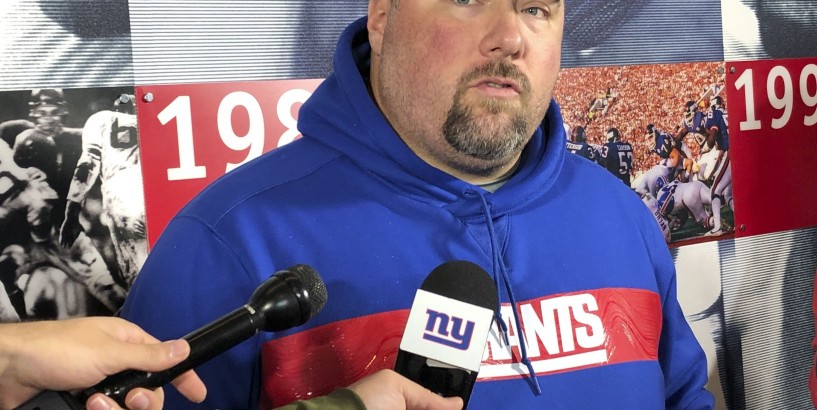 EAST RUTHERFORD, N.J. (AP) — New York Giants defensive coordinator James Bettcher had no intention of designing two game plans, even though Chicago Bears starting quarterback Mitchell Trubisky has a shoulder injury. Bettcher is getting the Giants (3-8) ready to face the Bears' offense, and it doesn't matter whether Trubisky is back at the helm Sunday at MetLife Stadium or veteran backup Chase Daniel is running the show again for Chicago (8-3).

The NFC North-leading Bears extended their winning streak to five games on Thanksgiving with Daniel leading Chicago to a 23-16 win over the Lions in his first start since 2014.

"They are both good quarterbacks," Giants linebacker and defensive captain Alex Ogletree said. "They haven't changed much of their offense for either one. They play a little different game, but for the most part, they do the same stuff. We are preparing for either one. You never know who is going to play. So if Chase Daniel plays, we will be ready for him, and if Trubisky plays, we will be prepared as well."

Trubisky was limited at practice on Wednesday and Thursday, so it is looking less likely he will play Sunday.

Bettcher said his approach every week is to see what the defense needs to do to give the team its best chance. It includes having some tweaks built in for the opposing quarterbacks.

"You certainly have some things that you like versus each of those two quarterbacks," Bettcher said.

Offensive coordinators do the same thing when the status of their starting quarterback is uncertain. They make separate sheets outlining the plays and throws each quarterback likes, although the game plan is relatively the same.

If Daniel gets the call again, he will have had a week practicing with the offense. He did not get that coming off a short week of preparation for the Lions and still completed 27 of 37 passes for 230 yards and two touchdowns.

"Listen, it's never changed for me and I told you this last week and I'll tell you it again: I prepare every day like I'm the starter whether I get practice reps or not," Daniel said. "This week, I got the reps and we'll see what it is (Thursday) and we'll see what it is on Friday. My whole thing is we just try to take it day by day. I try to grasp the game plan day by day."

Bears coach Matt Nagy said the team would do what is best for Trubisky. If he plays, it will be because he is ready to go.

Khalil Mack leads the Bears with eight sacks. The Giants have given up 38, tied for second-worst in the league. Left tackle Nate Solder will draw the primary assignment on Mack, but the linebacker also switches sides so he also will go up against right tackle Chad Wheeler. Expect the Giants to help both players with a back or tight end helping on Mack.

Bears safety Eddie Jackson is on a scoring tear. He returned interceptions for key touchdowns the past two games against Minnesota and Detroit, earning him NFC defensive player of the week honors. Throw in a fumble recovery that he ran back to the end zone against Buffalo on Nov. 4, and he has three TDs in the past four games.

That gave him an NFL-leading five defensive touchdowns since the Bears drafted him in the fourth round in 2017.

"I've never seen anything like him," defensive end Akiem Hicks said. "He can cover the entire field it seems like sometimes. He knows how to get the ball in his hands and when he gets that ball in his hands he can make his way to the end zone."

After missing the first five games with an ankle injury, Giants linebacker/defensive end has recorded one sack in six games. His other statistics aren't good, either. He has 10 tackles and six quarterback hits. Earning $17 million this season, Vernon was expected to be a dominant pass rusher in the new 3-4 system installed by Bettcher.

Nagy has expressed a desire to get Chicago's ground game going. Maybe this is the week it happens.

After all, the Bears will be facing a defense ranked 26th against the run. The Bears have rushed for 64 yards or less in three of the past four games — 38 last week.

The Bears have the NFL's second-best run defense, allowing an average of 80.8 yards. They just haven't faced a halfback like Giants rookie Saquon Barkley.

Playing behind a struggling line, the second pick overall has run for 829 yards. He has run for at least 100 yards the last two games. Add in his 71 catches for 581 yards and he has 1,410 yards from scrimmage, No. 3 in the league. His 12 touchdowns (eight rushing, four receiving) are one shy of franchise rookie record and two short of the team's single-season mark.