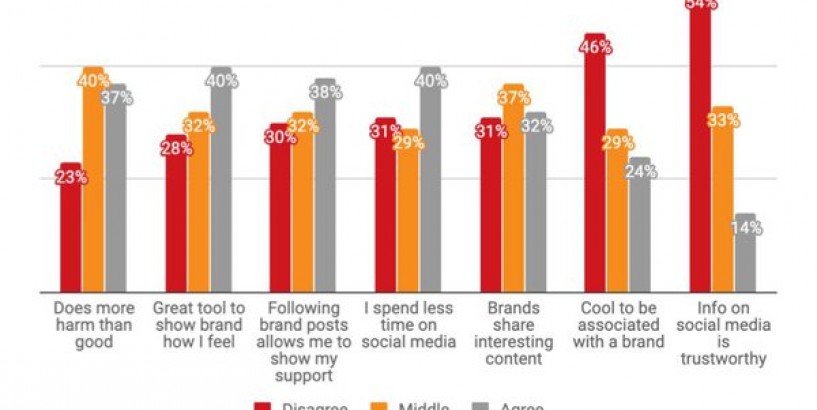 Forrester: Brands Complicit In Social Media's Toxicity, Being Held Hostage By It Too 05/19/2020

by Joe Mandese @mp_joemandese , 9 hours ago

Marketers are complicit in the toxicity of social media, they misunderstand its function and how brands should participate in it, and yet they appear to be held hostage by it. Those are some of the main paradoxes confronting brand marketers, according to a damning new report from the social media analyst at Forrester Research.

“Every company should ask the question, ‘Should we be on social media?’,” writes Forrester analyst Jessica Lieu in the new report, “It’s OK To Break Up With Social Media.”

“Too often, the ill-researched answer is ‘yes,’” she continues, noting that it has led to a social media environment that is “littered with marketers shouting at consumers and contributing to societal degradation online.”

While Liu doesn’t explicitly tie brand marketers to some of the most destructive aspects of social media -- the rampant spread of disinformation, the theft and/or misappropriation of users’ data, or the unconscious manipulation of their feeds -- she does imply they are aiding and abetting it.

“Social networks have developed negative reputations for failing to address issues such as fake news, privacy violations, online bullying, and addictive behavior,” she notes, citing a recent Forrester survey’s finding that 37% of American adults believe social media does more harm than good, and only 14% believe the information they read on social media is trustworthy.”

“Even honest social advertisers aren’t absolved,” she concludes, adding: “They fuel social networks with their advertising spend while asking for no safeguards for a healthy environment in return.”

Aside from underwriting a platform for truly bad actors, Liu also asserts that many brand marketers are tone deaf in their use of social media; misconstrue it as being about their brands, and not the consumers they are trying to serve; and are mainly just contributing to the noise and clutter that is making a mess of social media.

The report concludes by making the point that brands shouldn’t be held “hostage” by a belief that they need to be active in social media, and that they should only be active if they have a genuine and authentic strategy for using it that benefits consumers.

“Over the last four years, CMOs believe that social media contributes too little to company performance, consistently rating it in the low 3s on a 7-point scale,” she observes, citing additional research conducted this year that nearly a third (32%) of CMOs are still unable to show its impact to business, and only 30% can prove the impact quantitatively.

“Don’t abandon your brand principles for the sake of “being on social,” and don’t succumb to social media Stockholm Syndrome,” she concludes.