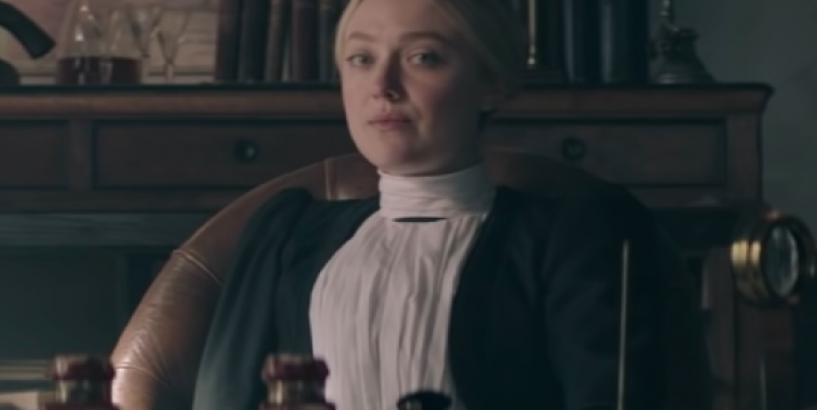 by Sarah Mahoney @mahoney_sarah , 5 hours ago

Dakota Fanning, star of "The Alienist," in a Gilded Age getup similar to dresses available in a special collection at Bergdorf's.

Most people don't take fashion cues from period psychodramas, nor do they see much connection between 1890s steak recipes and stressed-out healthcare workers.

But for TNT's premiere of the second season of "The Alienist," called "Angel of Darkness," it all came together -- and fast.

Timed to coincide with the second season, the promotion includes a 204-piece capsule collection at Bergdorf Goodman. And Delmonico's Steakhouse, practically a character in the show’s 1880s set, played a role with a 2020 twist. TNT brought back the restaurant’s furloughed staff, including its executive chef, to spend the day cooking and packaging 500 three-course meals for healthcare providers.

"We wanted to celebrate the city that inspired the series," says Justin Lefkovitch, CEO of Mirrored Media, the experiential agency that handled the promotion. "And since we're in the time of COVID and a premier event at Delmonico's wasn't an option, we kept asking, 'How can we give back to the city we love?’"

For the uninitiated, “The Alienist” is a psychological thriller set in the Gilded Age of Manhattan. Fans love its meticulous attention to period details in everything from costumes to furnishings to food.

None of the Bergdorf's collection is customized, since there wasn't time. But the items curated for the digital popup would look right at home on set. They include a $47,000 diamond collar necklace, a $15,000 feather-trimmed dress, a $2,600 Jimmy Choo ostrich-feather clutch and a $70 Christian Louboutin Lip Oil. (The storied retailer is owned by the Neiman Marcus Group, which filed for bankruptcy back in May.)

The Delmonico's portion of the promotion, timed to the show's release, was more challenging. To stay true to the spirit of the show, the restaurant served 500 healthcare workers at New York's Mount Sinai West, Manhattan VA Medical Center and Bellevue Hospital some of the classics it's been dishing up for more than a hundred years. The three-course menu included classic BLT wedge salad, original Delmonico's steak and rice pudding cake.

"We had to handle the logistics safely, including those at the restaurant, the packaging of the meals and those delivering them," Lefkovitch tells Marketing Daily. "It was such a collaborative effort."

TNT says it loves the Bergdorf/Delmonico's combo. "When crafting ‘The Alienist: Angel of Darkness’ marketing campaign, we were deliberate in choosing partners. We only wanted brands and creators that felt authentic to the show and matched the level of magic that is ‘The Alienist,’" said Telmo Tabuas, senior vice president of brand marketing at WarnerMedia Entertainment, via email. "And we've been thrilled with the reaction we've seen from fans."