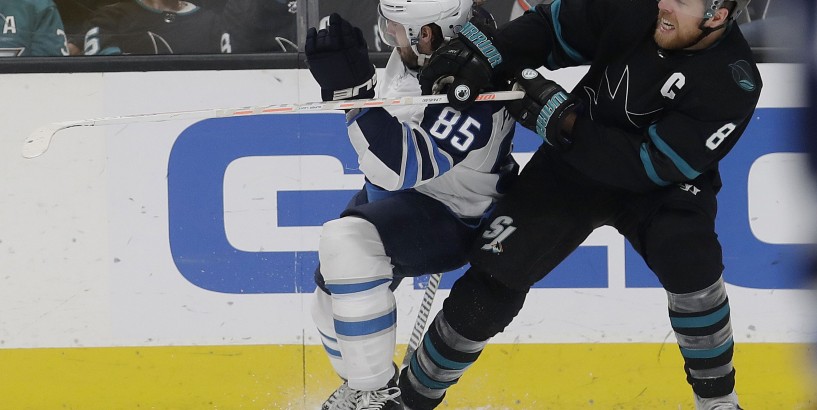 SAN JOSE, Calif. (AP) — Nikolaj Ehlers recorded his fourth career hat trick, Mason Appleton got his first career goal and the Winnipeg Jets won for the sixth time in seven games, 5-3 over the San Jose Sharks on Thursday night. Dustin Byfuglien also scored to help the Jets bounce back from a loss at Los Angeles on Tuesday. Connor Hellebuyck made 41 saves.

Evander Kane had a goal and an assist against his former team and Joe Thornton moved into 10th place all-time in assists for the Sharks, who had won five in a row. Joe Pavelski and Joonas Donskoi also scored, and Martin Jones made 19 saves.

The Sharks controlled much of the final two periods but fell short when Blake Wheeler set up Ehlers for the game-winner with 3:09 remaining in regulation. Wheeler skated around the net, drawing Jones out of his crease, and then fed Ehlers in front, who knocked the puck in past Pavelski.

Ehlers then added an empty-net goal to seal the win.

It was an action-packed first period that featured five goals, five power plays, a fight between Barclay Goodrow and Brendan Lemieux, and a handful of big saves.

After the teams traded penalties in the opening 40 seconds, the Jets struck first during 4-on-4 play when Byfuglien stripped Brent Burns near the blue line and skated in for the breakaway goal 51 seconds into the game.

But in a sign of what was to come, the Sharks answered just 45 seconds later when Thornton forced a turnover that led to an odd-man rush that Kane converted for his first goal in six games against his original team. Thornton's 1,040th assist tied Marcel Dionne for 10th place all-time.

San Jose then took the lead nine seconds after Tyler Myers was called for interference, with Kevin Labanc's shot from the circle hitting Pavelski's pants on the way into the net. Pavelski's 22nd goal in the 36th game of the season equaled his total from all of last season.

The Jets responded with two more goals in the next 2:17, starting when Wheeler's dump in deflected off the back boards right into the slot where Ehlers knocked it into the open net.

Nic Petan then set up Appleton for his first career goal to make it 3-2, and that's where the game stood after Hellebuyck made a big save on Timo Meier and Burns hit the post on the power play in the final two minutes of the period.

The second period wasn't quite as frenzied, although Jones did rob Ehlers late in the period before the Sharks tied it with 5.3 seconds left when Donskoi deflected a pass from Kane into the net.

NOTES: Sharks D Erik Karlsson has assists in seven straight games. ... Donskoi has 100 career points. ... Petan suited up for the Jets after missing the previous 10 games as a healthy scratch, taking the place of Adam Lowry.