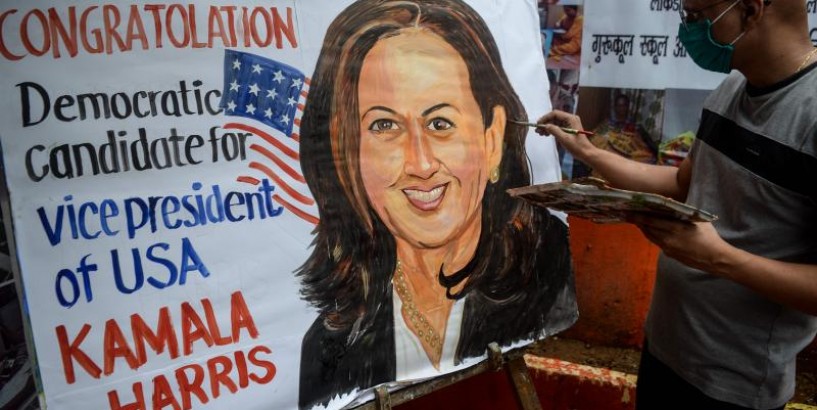 An art enthusiast paints on a canvas the face of presumptive US Democratic Vice President nominee Kamala Harris outside a drawing school in Mumbai. (AFP) Chicago : Bantering during the final night of the Democratic National Convention, actor Julia Louis-Dreyfus and former presidential candidate Andrew Yang repeatedly got the name of “our current vice president” wrong. Was it “Mika Pints?” or “Paints?” Or maybe “Ponce,” Yang suggested.

Harris’ first name is pronounced “KAH’-mah-lah” — or, as she explains in her biography, “‘comma-la,’ like the punctuation mark.” But mispronunciations have been rampant in the days since the California senator became the first Black woman and the first Asian American woman named to a major party’s ticket. Pence referred to her as “kah-MAH’-lah,” putting his emphasis on the second syllable, at events last week. Republican National Committee Chair Ronna McDaniel did the same on Wednesday, as did Trump at a rally in Pennsylvania on Thursday, the day after Harris delivered a prime-time speech accepting the Democratic nomination — a speech he indicated he watched.

Harris’ supporters say the pattern amounts to a deliberate effort by Trump and his allies to portray Harris — the daughter of immigrants — as someone who does not belong at the top ranks of politics. The mispronunciations follow a string of attacks that include racist and sexist memes and questioning about whether Harris, who was born in California, is eligible to serve as vice president because her mother was Indian and her father Jamaican. (Constitutional scholars and other legal experts say there is no question that she is eligible.)

“It is an effort to diminish her,” said Fatima Goss Graves, president of the National Women’s Law Center Action Fund. ”It’s designed to signal difference.”

Trump campaign officials did not immediately respond to questions about the errors.

To be sure, Harris isn’t the only politician who has watched other politicians and voters trip over her name. Former President Barack Obama, whose father was from Kenya, used to crack jokes about being a “skinny kid with a funny name.” Former presidential candidate Pete Buttigieg, whose father was from Malta, went mostly by “Pete” — though his campaign made posters, chants and T-shirts with the pronunciation “Boot-Edge-Edge.”

In the introduction to her biography, Harris says her name means “lotus flower.” It’s a symbol of significance in Indian culture, she wrote, noting “a lotus grows underwater, its flower rising above the surface while its roots are planted firmly in the river bottom.”

When she first ran for the U.S. Senate, her campaign produced a video with small children demonstrating the proper way to say her first name.

But her defenders say Harris is well past the point of introduction — especially with Republican opponents. Harris served as California’s attorney general for seven years before being elected to the Senate in 2016. Since then, she’s made headlines for tough questioning of Trump appointees and raised her profile even more with her bid for the 2020 Democratic presidential nomination.

And even before she was elected to the Senate, Trump knew who she was — he donated to her 2014 campaign for attorney general.

Yet Trump has continued to get her name wrong, as have his allies.

Trump’s personal attorney Rudy Giuliani called Harris “Pamela” during an appearance on Fox News. Pence mispronounced her names multiple times during a stop last week in Iowa, where he warned a cheering crowd that the November election isn’t about a choice between Republicans and Democrats or conservatives and liberals.

“I think the choice in this election is whether America remains America,” he said, going on to mispronounce her name moments later.

Pence pronounced Harris’ name correctly during an appearance on Fox News on Friday, hours after the exchange between Louis-Dreyfus and Yang.

Fox News host Tucker Carlson grew agitated when a guest corrected him last week after he also pronounced Kamala incorrectly. “So what?” he said, before mispronouncing her name again and complaining about liberals being too sensitive.

McDaniel also got the pronunciation wrong earlier this week during an appearance on Fox News, even though the host questioning McDaniel was saying it correctly.

Many people, particularly people of colour, relate to Harris having her name mispronounced because they face the same situation in workplaces and elsewhere, said Goss Graves. She’s grappled herself with people mispronouncing her first name — it’s fah-TEE’-mah — and whether, or when, to correct them.

But it’s a very different thing, she said, to be a candidate for one of the highest offices in the world and have your colleagues and members of the media repeatedly mispronounce your name — or not care enough to get it right.

“When people are running for the highest levels of government, there’s an expectation they will be afforded with dignity and respect,” she said.