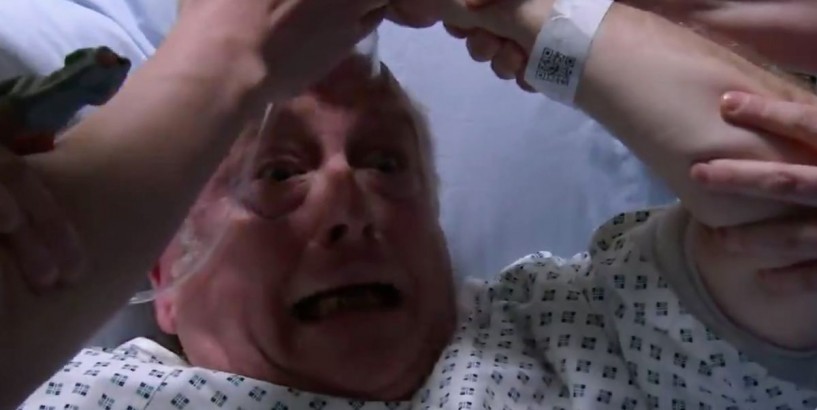 Coronation Street airs fresh trauma for Yasmeen Nazir in the coming weeks, as she appears in court charged with attacking her husband Geoff Metcalfe. Yasmeen was arrested after almost killing him, having been pushed to the edge by months and months of abuse.

Geoff has been manipulating her and isolating her from loved ones, keeping her firmly under his control.

Things took a horrific turn on Friday, days after cheating Geoff blamed her for him being diagnosed with a sexually transmitted infection - despite knowing it was him who gave it to her.

Starving her and keeping her in the house when she tried to escape, his last attack saw him verbally tormenting her and scaring her as he wielded a knife.

Yasmeen hit him over the head with a bottle, before stabbing the broken glass into his neck.

On Monday, she told emergency services she had killed him - leading to her arrest.

Geoff had survived the assault though, and remained in a coma after almost dying in hospital.

Keep up with all the soap news Life moves fast in soapland, so make sure you stay up to date with all the latest from your favourite soaps with our regular email newsletter.

Sign up using this form to receive regular updates on Corrie, Emmerdale, EastEnders direct to your inbox. We'll also keep you up to date on what your favourite stars are up to in the real world too, and the breaking news as it happens.

His son Tim warned his family that they had to prepare for the worst, as Yasmeen's ordeal remained a secret.

But a new trailer for the ITV soap has confirmed Geoff does pull through, and brings further turmoil for his victim.

Geoff wakes up in hospital and has to be restrained as he starts screaming out appearing to be in a panic.

Read More Showbiz editor's picks What he says will do no favours for his wife, as other scenes show her appearing in court as her horrified granddaughter Alya watches on.

Geoff tells those in the room: "She tried to kill me!" as they attempt to replace his oxygen mask.

It seems he's intent on blaming her and making her out to be entirely in the wrong, not confessing the abuse he has made her face for months.

Yasmeen was accused of attacking Geoff for no reason by detectives, with her not opening up about her ordeal.

Fans hope Peter Barlow, Alya or even Eileen Grimshaw will help Yasmeen, and reveal any suspicions over the abuse.

Only Alya knows what has been going in, but wasn't able to get her grandmother away in time.