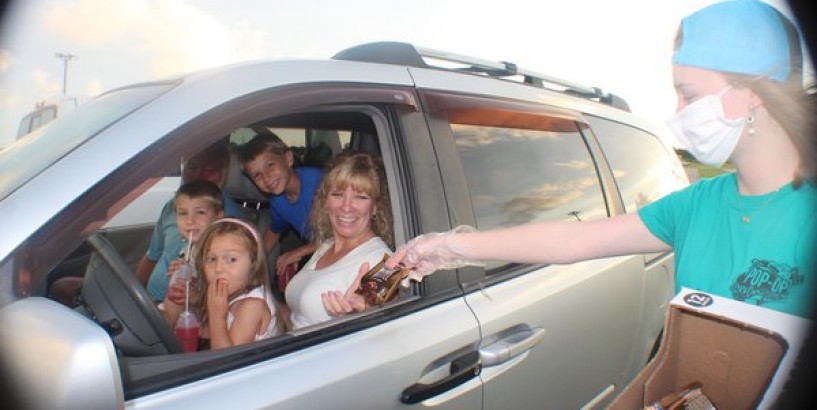 by Laurie Sullivan @lauriesullivan , 6 hours ago

Social distancing is bringing drive-ins back to life by connecting them with online marketing amidst the COVID-19 pandemic. Event locations are rethinking and complying and brands are too.

The drive-in format has become the premiere place for country singers Garth Brooks and Blake Shelton and brands like Brownie Brittle and Sparkling Ice to connect with consumers in-person and digitally.

Ashley Dawkins, VP of marketing at Brownie Brittle, has participated in four campaigns. She logs in to the online portal of Recess, which provides event details. Through the platform, she schedules delivery of products to the drive-in, which handles the distribution the day of the event.

The tickets handed out at the drive-in have a QR code and a discount code for money off the product when sold through a store, Dawkins said.

“Drive-in events are pretty small — about 1,500 samples, compared with the college events we’ve participated in,” she said. “There are about 50,000 students at college events.”

Dawkins also recently ran a campaign where the company sent goodie boxes to social media influencers, stating that Brownie Brittle is the perfect comfort snack food during the work-from-home mandate.

Recess, the organizer of the drive-in theater events, works with hundreds of movie theaters across the country.

Jack Shannon, co-founder and CEO at Recess, wanted to build scalable campaigns spanning from digital to in-person marketing and found quite a few brands were interested to cross the line.

In addition to Brownie Brittle, there are brands such as Talking Rain that took advantage of promoting their product Sparkling Ice at drive-ins by putting together a gift bag and giving one out to each attendee.

The campaign for Sparkling Ice is spearheaded by Ellie Kohl, regional field marketing manager for the company.

“Sometimes you sign up with an email or there’s a QR code on the big screen,” he said. “Other times there’s a piece of paper with digital offers, giveaways and games.”

In another example of how brands are being creative, Domino's on Monday launched a virtual film festival where fans can submit homemade videos for a chance to win a year's worth of free pizza.

The Homemade Film Festival is accepting videos through Aug. 21 .

Customers also can visit this site to vote for their favorite home movie between September 7 and 11 . On Sept. 18 , the company will announce the grand prize winner, who will receive free pizza for a year in the form of $1,560 in Domino's eGift cards.