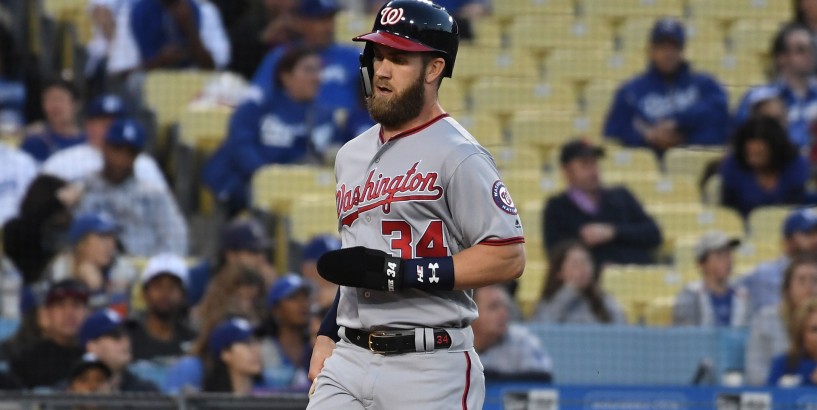 Let friends in your social network know what you are reading about Facebook Email MLB's winter just got even more wild – but don't put Bryce Harper in Dodger Blue yet While the Dodgers' deal with the Reds on Friday certainly appeared to open a hole for Harper to fill, the Dodgers have plenty more work to do. Post to Facebook MLB's winter just got even more wild – but don't put Bryce Harper in Dodger Blue yet While the Dodgers' deal with the Reds on Friday certainly appeared to open a hole for Harper to fill, the Dodgers have plenty more work to do. Check out this story on lcsun-news.com: https://www.usatoday.com/story/sports/mlb/columnist/gabe-lacques/2018/12/21/bryce-harper-dodgers-free-agent-trade/2393036002/ Cancel Send A link has been sent to your friend's email address. Posted! A link has been posted to your Facebook feed. Join the Conversation To find out more about Facebook commenting please read the Conversation Guidelines and FAQs This conversation is moderated according to USA TODAY's community rules . Please read the rules before joining the discussion. MLB's winter just got even more wild – but don't put Bryce Harper in Dodger Blue yet Gabe Lacques, USA TODAY Published 4:58 p.m. MT Dec. 21, 2018 | Updated 8:01 p.m. MT Dec. 21, 2018 Bryce Harper is one of the premier free agents this winter. (Photo: Richard Mackson, USA TODAY Sports) CONNECT COMMENT EMAIL MORE No, Bryce Harper was not quite fitted for Dodger Blue on Friday night. There was no need – not yet – for Harper to dial up Fernando Valenzuela and ask the Dodgers legend and current broadcaster if it’s cool to break No. 34 out of semi-retirement. Oh, the seven-player deal with the Cincinnati Reds – a classic Dodgers deal involving dead money, dead players walking and even some actual, living baseball assets – absolutely gets L.A. in the Harper fray. And they are certainly equipped to take a strong run at the erstwhile Washington National, a brand unto himself and, at 26, a power-hitting outfielder still in his prime. What we still don’t know is if this Andrew Friedman-led regime will ever desire a player so much, they’ll go to any length for him. It’s possible Harper is that guy, but it’s equally possible the Dodgers have a tipping point in mind, and would be prepared to walk away when the money gets too crazy. With that, we present the only guarantee after the Dodgers beat the holiday buzzer and cleared the decks for a superstar: Harper and Manny Machado just got a whole lot richer. Suddenly, agent Scott Boras has a big, blue stalking horse, an iconic franchise worth some $3 billion that’s thirsting for a World Series after falling just short in two consecutive years. And what if the Dodgers, against all reason, didn’t do this to kick the tires on Harper? That doesn’t really matter, does it? All Boras needed was the appearance the Dodgers are in. Now, he can truly strike fear in the heart of Jerry Reinsdorf in Chicago, or John Middleton in Philly, who know there won’t be any sneaking in and preemptively snagging the two greatest players to hit free agency this decade. Until Friday’s deal, that remained something of a possibility. While there was always the chance of a covert strike by a Dodgers or Cubs or Yankees, it also seemed plausible that the White Sox and Phillies – both sitting on piles of cash and both desperate to goose a pair of shriveling fan bases – would squire away their stars. Harper to the White Sox, where he’d join Eloy Jimenez for a breathtaking 1-2 outfield punch. Machado to the Phillies, who could offer him third base through 2030 and enough cash to just about match Harper’s haul, if not exceed it. Now? Well, Mr. Middleton, the money’s about to get real stupid , indeed. The beauty of the Friedman regime in L.A. is that the Dodgers are rarely boxed into a corner; transactions are consummated in a fashion that leaves several options for the next move in the sequence. And right now the Dodgers are sitting very pretty – free to be as aggressive as they want to be. Here’s what aggressive looks like now: Flip Jeter Downs and Josiah Gray, along with one of their stellar catching prospects, Keibert Ruiz or Will Smith, to the Marlins for J.T. Realmuto. Lavish Harper with a lifetime contract that begins with a 4 and is followed by too many zeroes to count. Win 110 games. Probably win the World Series – and if you fail, no one can ever say you didn’t try hard enough. And if that doesn’t pan out? Well, they’ll just have to make do with an outfield of top prospect Alex Verdugo and myriad combinations of Cody Bellinger, Joc Pederson, Kike Hernandez and Chris Taylor in left or center. That group is a large reason the club won 196 games and two NL crowns the past two seasons. It’s definitely workable. There are also mid-range options, such as free agent outfielder A.J. Pollock, whose health problems could be mitigated by plugging him into the Dodgers’ Platoon-o-Matic machine. In terms of Harper vs. Machado, right now No. 34 has the edge, in that there’s likely three potentially aggressive suitors on him; with Corey Seager returning at shortstop and Justin Turner at third, the Machado marriage in L.A. was definitely temporary. But if the Dodgers open the checkbook for Harper, it’s game on for Manny. The Phillies’ and White Sox’s war chests are deep. The Yankees certainly wouldn’t mind jumping in. Once the bidding starts, the words “Johnny Hustle” would be a distant memory. And Harper and Machado would both likely clear Giancarlo Stanton’s $325 million bar for biggest contract in big league history. Merry Christmas, gentlemen.