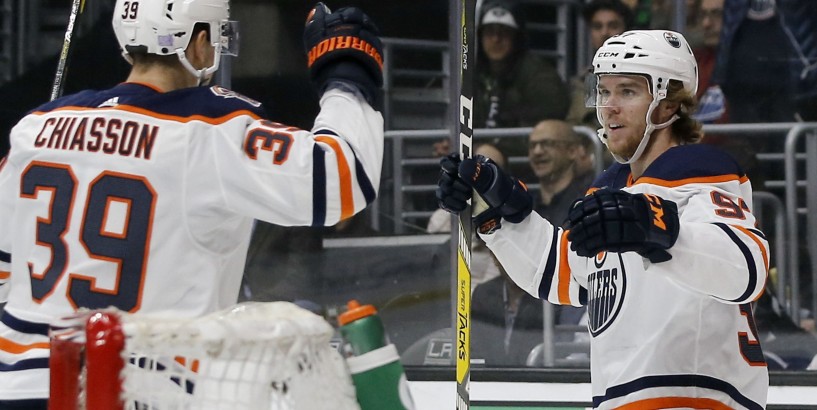 Alex Chiasson scored twice for the Oilers, who went 1-1-1 during their first road trip under new coach Ken Hitchcock. Connor McDavid had an assist to extend his point streak to six games, and Cam Talbot made 27 saves.

Kopitar put the struggling Kings in front 4: 27 into the third period when Derek Forbort sprung the Kings' captain for a breakaway with a long pass into the neutral zone. Kopitar used a wrist shot through Talbot's legs for his third goal in the last five games.

Brown completed his hat trick at 19:06 with an empty-net goal, and Luff, a rookie, added an empty-netter at 19:33 to extend his scoring streak to four games.

Brown scored on the power play to tie the game at 2-all 4:13 into the second period after Chiasson put Edmonton in front at 2:16.

Chiasson tied it at 1-1 at 13:19 into the first period with his ninth goal of the season. McDavid picked up his 10th point and seventh assist during his point streak.

Brown gave the Kings a 1-0 lead at 7:56, tapping in a pass from Kopitar at the back post after they got in behind three Oilers. It was Brown's first goal since Nov. 3 and ended a stretch of eight games without scoring.

NOTES: Kings F Carl Hagelin was placed on injured reserve after sustaining a sprained MCL in his knee against Vancouver on Saturday. Hagelin will have an MRI on Monday. . Kings G Jonathan Quick is expected to return during the team's upcoming three-game Canadian road trip, coach Willie Desjardins said. Quick has not played since sustaining a knee injury in practice on Oct. 27 that required surgery.

Kings: Visit the Canucks on Tuesday.