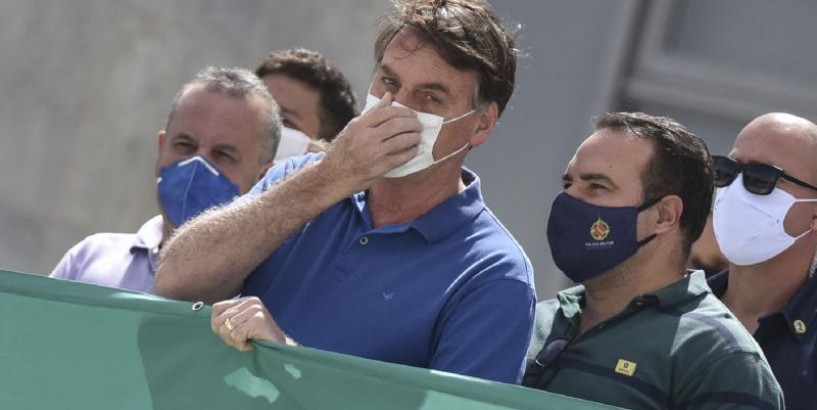 In this May 17, 2020 file photo of Brazil's president Jair Bolsonaro, wearing a protective face mask as a precaution against the spread of the new coronavirus. A profanity-laced video showing Bolsonaro expressing frustration at his inability to get information from police and vowing to change Cabinet ministers if needed to protect his family was released on Friday, May 22, 2020, at the order of a Supreme Court justice in a new blow to a president whose popularity has been sagging. (AP) Brasilia: Brazilians got a shocking look Friday at an expletive-laced meeting between president Jair Bolsonaro and his cabinet when a Supreme Court judge released a video at the centre of an investigation targeting the far-right leader.

The April 22 cabinet meeting is under scrutiny by prosecutors probing allegations by former justice minister Sergio Moro that Bolsonaro tried to interfere in federal police investigations.

But it could prove just as damaging to Bolsonaro's 18-month-old government for other sordid details it contains.

They include the president using profanity to insult governors, the education minister calling to throw Supreme Court justices in jail and the environment minister urging the government to legalize mining and farming in the Amazon rainforest while the world is distracted by the coronavirus pandemic.

The video came to light when Sergio Moro resigned two days after the meeting.

In a damaging final press conference, the then-justice minister, a popular anti-corruption crusader, accused Bolsonaro of "political interference" in the federal police.

Police are reportedly investigating multiple cases involving Bolsonaro and his inner circle, including allegations that his son Carlos, a Rio de Janeiro city councilor, oversaw a fake-news campaign to benefit his father.

Moro's allegations led a Supreme Court justice to order an investigation into whether Bolsonaro obstructed justice or committed other crimes.

The probe, which could see Bolsonaro tried or even impeached, comes as the president faces growing disapproval ratings and criticism over his downplaying of the coronavirus pandemic, which has claimed more than 21,000 lives in Brazil.

In the video, Bolsonaro rails against what he calls a lack of information from the federal police, or PF.

"I can't be getting surprises in the news. Hell, the PF doesn't give me information," he says. "I can't work like that. That's why I'm going to interfere, period. It's not a threat... it's the truth."

At another point, he says: "I've already tried to change our security people in Rio de Janeiro, officially, and I couldn't. That's finished now. I'm not going to wait for them to fuck my whole family, my friends, because I can't change someone in our security apparatus."

Anticipating the release of the video, the president had already sought to do damage control, saying he was talking about ensuring his family's security, not protecting anyone from investigation.

"Another farce just collapsed. There's not a second in the video where someone could suspect I interfered in the federal police," Bolsonaro said after its release.

Confined to their homes by the pandemic, Bolsonaro opponents held raucous protests after the video's release, banging pots and pans out their windows.

Excerpts of the video played non-stop on Brazilian TV.

In one, Bolsonaro slings swear words at the governors of two of Brazil's biggest states, Sao Paulo and Rio de Janeiro, for defying him by imposing stay-at-home orders to contain the coronavirus.

"That piece of shit of a governor in Sao Paulo, that pile of manure in Rio de Janeiro," he says.

"That's why I want... the population to be armed. That's what guarantees that some son of a bitch can't just show up and install a dictatorship here."

In another, education minister Abraham Weintraub attacks the Supreme Court for giving states the final say in the matter.

"If it were up to me, I'd throw all these criminals in jail, starting with the Supreme Court," he says.

In yet another, environment minister Ricardo Salles says, "Now that the media's only talking about COVID, we need to use this moment of calm to change all the regulations" preventing mining and farming on protected land in the Amazon.

In another potentially explosive twist to the probe, opposition parties in Congress have asked investigators to seize Bolsonaro's cell phone and that of his son Carlos.

The Supreme Court judge overseeing the probe passed the request Friday to the attorney general, who must now decide on the request.