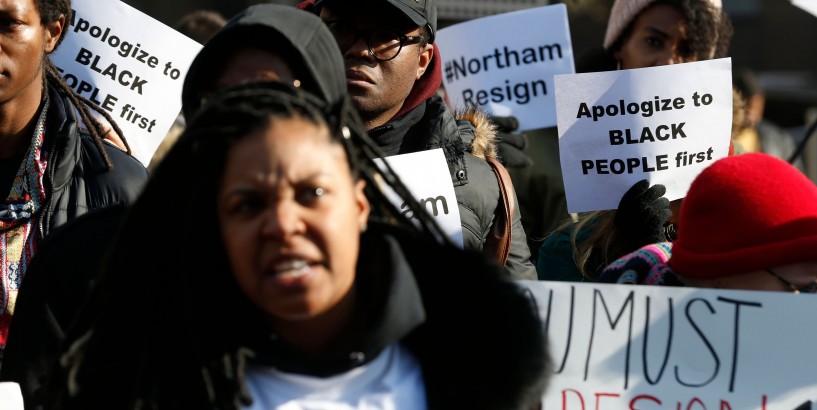 Blackface shows how deeply rooted antiblack racism is in America

Demonstrators hold signs and chant outside the Governors Mansion at the Capitol in Richmond, Va., Saturday, Feb. 2, 2019. (Photo: Steve Helber, AP) All three offered apologies, but none sees himself as racist. Northam said he wore blackface to dress as Michael Jackson for a dance contest in 1984, and at a news conference, he appeared on the verge of demonstrating the moonwalk before being restrained by his wife. Norment told The Virginian-Pilot that he was just one of seven yearbook editors. “I was kind of the first sergeant,” he said. “I'm still culpable, but it is by association with a team that produced that yearbook with those photos.” In Florida, Michael Ertel, the Republican secretary of state, resigned the same day that photos from a Halloween party in 2005 showing him in blackface mocking survivors of Hurricane Katrina were made public. He said he is a better man today and blamed his troubles on someone from his past exacting revenge. Promoting a new movie last week, Hollywood actor Liam Neeson, star of the "Taken" franchise, confessed that 40 years ago, he armed himself with a bludgeon and angrily roamed the streets in search of a black man to avenge a friend’s sexual assault. He insisted in a subsequent interview that he is not racist. Scholars of critical race theory say that being white grants these men the privilege to judge for themselves whether they've displayed contempt or bias toward another race. "That's like us imagining that an individual has the ability to diagnose a disease," says Ibram X. Kendi, founding director of the Antiracist Research and Policy Center at American University and author of “Stamped from the Beginning: The Definitive History of Racist Ideas in America.” “People are not trained to diagnose their own racism. People are only trained to deny their own racism." 'New norms' In a fraught political climate, anti-black incidents are on the rise. Reported hate crimes in America increased 17 percent last year, according to the FBI, the third straight year that such crimes increased. Of the more than 7,000 incidents reported last year, 2,013 targeted African-Americans. Incidents of racial bullying in K-12 schools are also growing. Last April, the Utah chapter of the NAACP called for schools to address a growing number of incidents in which white students used racial slurs against black students. A student in Los Angeles and another in Missouri turned up at school in KKK costumes for school projects last year. More: Director Spike Lee boycotts Gucci, Prada brands over blackface fashion John Powell, who leads the UC-Berkeley Haas Institute for a Fair and Inclusive Society, draws a straight line to the inflammatory rhetoric and polices of the Trump administration. "What used to be at the fringe is becoming mainstream, and it's creating new norms,” he says. “That's why we've seen an uptick in racist incidents and more subtle expressions of racism and racial dominance.”

Virginia Gov. Ralph Northam, left, gestures as his wife, Pam, listens during a news conference in the Governors Mansion at the Capitol in Richmond, Va., Saturday, Feb. 2, 2019. Northam is under fire for a racial photo that appeared in his college yearbook. (Photo: Steve Helber, AP) People of all races harbor racist ideas and beliefs, scholars say, but they are so immersed in a system that systematically favors whites, they are unable to distinguish between what’s racist and what’s not. Some people reject the idea that blackface – a relic of minstrelsy, popular entertainment from the 19th century rooted in the mimicry and mocking of plantation slaves – is racist. A majority of Americans – 56 percent – and 88 percent of Democrats say the practice is unacceptable for a white person, but 29 percent of Republicans and 30 percent of Trump voters disagree, according to a survey from The Economist/YouGov. Beyond blackface Though important, the focus on blatant and egregious expressions of racism – burning crosses, the violence in Charlottesville, Virginia, hurling racial epithets – draws needed attention away from the more insidious forms of racism and structural inequities that plague American society, says Eduardo Bonilla-Silva, a Duke University sociology professor. “We notice blackface. We notice someone wearing a white hood or using the N-word, because those belong to a racist past," says Bonilla-Silva, author of “Racism without Racists: Color-Blind Racism and the Persistence of Racial Inequality in America.” What often isn't discussed in mainstream debates, he says, are the everyday conditions that reinforce racial inequality: African-Americans being racially profiled in stores or by the police, being turned down for jobs or apartments or facing discrimination when buying a home or a car. “This moment could allow for a conversation about how we all participate in various ways in the racist order, but it can also then make invisible the most prevalent forms of racial exclusion, discrimination and thinking," Bonilla-Silva says.

The cancellation came three days after Kelly's Oct. 23 show, in which she said that blackface Halloween costumes were acceptable when she was young as long as they were respectful. The next morning, she apologized on air, saying, "I was wrong and I am sorry. She added, "It is not OK for (blackface) to be part of any costume, Halloween or otherwise." But the apology was not enough to save her show. (Photo: Nathan Congleton/NBC) Some see each new leaked photo or video as an opportunity to raise awareness of the ugly history of blackface. In October, Megyn Kelly was condemned by her then-NBC colleagues for wondering aloud on air why it was inappropriate for white people to dress in blackface on Halloween. More recent incidents – a photograph of “The View” co-host Joy Behar taken at a Halloween party when she was 29 dressed up as “a beautiful African woman” and Gucci yanking a $899 black balaclava sweater that covered the face with a mouth opening showing lips outlined in bright red that some said resembled blackface – also sparked outrage. "I think we will see some good come out of these latest revelations. People will be more educated," says Mia Moody-Ramirez, a Baylor University professor and author of “From Blackface to Black Twitter.” "They can no longer argue they didn't know that it is not appropriate to put on makeup to darken their face or change their hair texture to look like their favorite actor or celebrity. That's going to be the positive outcome of this. They will no longer have that excuse." More: Virginia's black caucus, House Dems, in go-slow move, call for Ralph Northam's ouster. But governor stays silent A deeper examination of the undercurrents of privilege and race in American society is unlikely to follow, says George Yancy, a professor of philosophy at Emory University and author of "Backlash: What Happens When We Talk Honestly about Racism in America." “The representation of blackness as dangerous, inferior, as buffoonery and aesthetically ugly continues to exist in every nook and cranny of white America,” he says. “Until white Americans develop the stomach, the capacity to begin to admit the ways in which racism continues to exist in them, both consciously and unconsciously, this moment will be just another racist incident we talk about for about a week and then move on.”