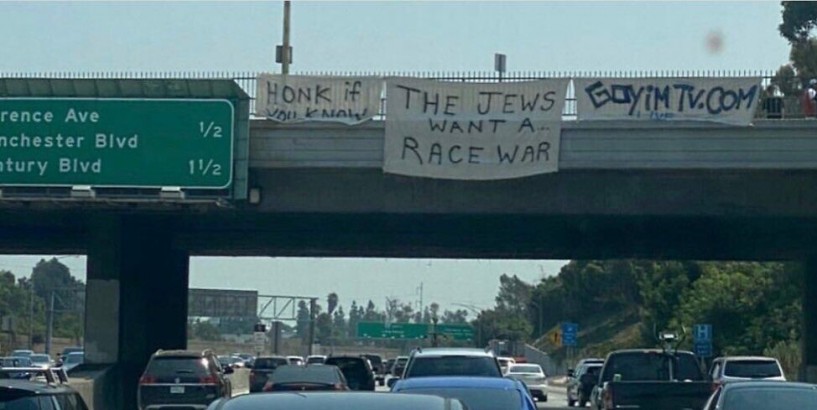 Anti-Semitic banners on a Long Angeles freeway on Aug. 22, 2020. Picture: Twitter/Rick Hirschhaut. “The Jews want a race war” message was hanging between “Honk if you know” and a reference to the website “GoyimTV.” By Adam Bandler By Adam Bandler, The Jewish Journal via JNS

A banner stating, “The Jews want a race war” was found hanging on an overpass on the 405 freeway in Los Angeles on Aug. 22.

The banner, which was close to the Florence Avenue exit in Inglewood, was also in between two other banners, one that read, “Honk if you know,” and the other referencing a website called “GoyimTV.”

“We’re aware of the #antisemitic banner drops from over the weekend on the 405 [freeway],” Anti-Defamation League Los Angeles tweeted . “We’ve been working closely with law enforcement to identify the perpetrators. We want to thank community members for contacting us & continue to encourage reporting. Los Angeles is #NoPlaceforHate.”

American Jewish Committee Los Angeles Regional Director Rick Hirschhaut similarly tweeted , “A shocking and outrageous display of antisemitism yesterday targeting motorists along the 405 Freeway in Los Angeles. Though eventually removed, it is essential that the [California Highway Patrol] and relevant agencies guard against such crude expressions of hate and assaults upon public safety.”

StandWithUs CEO and co-founder Roz Rothstein also tweeted , “People are circulating this picture of a nasty/hateful sign that was hung on one of the Los Angeles freeways. So some nuts think that Jews want a ‘race war.’ Seriously. Isnt [sic]that what neo-Nazis (who hate Jews) want? Maybe the nuts are confused.”

Associate Dean and Director of Global Social Action Agenda at the Simon Wiesenthal Center Rabbi Abraham Cooper said in a statement to the Journal , “SWC has asked Councilmembers [Paul] Koretz and [David] Ryu to get the Jew-hating banners unfurled by anti-Semitic cowards removed by DOT [Los Angeles Department of Transportation]. They will continue their anonymous attacks on social media and everywhere else they can act stealthily to spread Jew-hatred without fear of being held accountable.”

The Los Angeles Police Department did not immediately respond to the Journal’s request for comment.