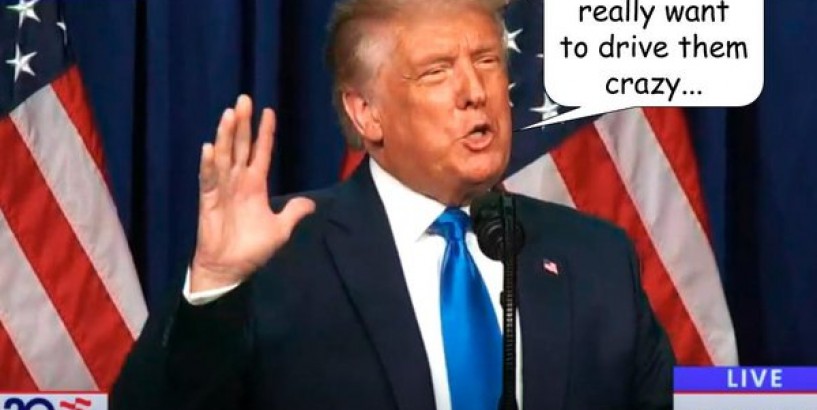 by Joe Mandese @mp_joemandese , 7 hours ago “If you really want to drive them crazy, say 12 more years,” were the first words uttered by the Republican nominee for President when he took the stage at the GOP convention Monday.

Because that’s what a President should want: to drive Americans crazy.

So much for the Republican National Convention sparking a positive, upbeat and optimistic note.

The President’s unconstitutional, autocratic quip, made in response to chants of “four more years, four more years,” set the tone for the rest of this week’s convention: Instead of focusing on what the President has accomplished during his first term, what promises he plans to break in his second, or even what the party’s new platform will be (none), the GOP convention began by once again trolling Democrats, lying, owning Libs, more lying, gun-slinging suburbanites, still more lying, testimonies from the President’s “Black friends” on why he’s not a racist, and what many believe were some opening keynotes made under the influence (No joke, search Twitter for rhymes with #coke and you’ll see a bounty of memes about Don Jr.’s and his girlfriend Kimberly Guilfoyle’s -- how should I put this -- amped-up speeches.

If the rest of this week’s convention is anything like its opening day, it will be American Carnage II, delivered by some American carnies who have nothing left to say about why you’d want four, much less 12, more years.

Personally, I think the cray-cray speeches were produced that way on purposes, because the President is obsessed with his ratings -- especially the TV kind -- and better to rule Nielsen in hell than serve America a vision of heaven. I guess.

Speaking of convention TV coverage, there was a fair amount of Fox News trashing by the President and his operatives about Fox News’ coverage, including a tweet by fired campaign manager Brad Parscale, saying, “Can’t believe I have to watch the convention on @CNN,” which sent with wall-to-wall coverage vs. Fox News’ analytical take.

The President also threw CNN a wet kiss, saying he was “very appreciative” of the network’s coverage.”