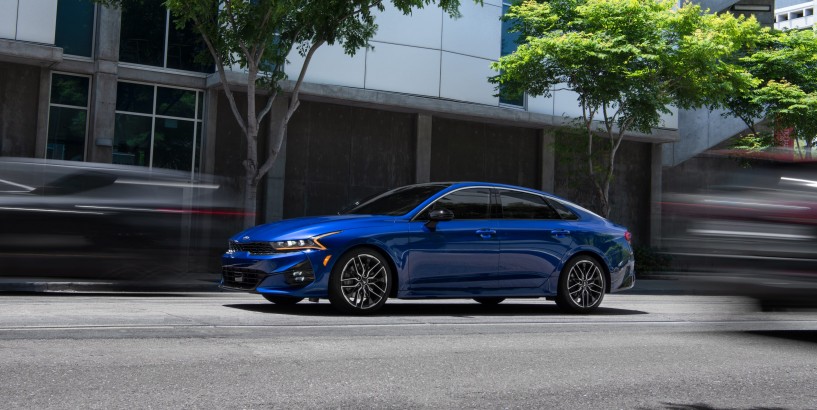 From a "shark skin inspired" black grille to all-wheel drive and a 290-hp performance model, Kia aims to shake up the midsize sedan market when the new 2021 K5 replaces its popular Optima later this summer. The K5 is a radical attempt to attract buyers to the midsize sedan market, which has been decimated as buyers flock to SUVs. The K5 adopts a Korean-market name that’s been popular among Kia’s most avid fans for years. The car’s striking exterior includes a wide, narrow black grille that reinterprets Kia’s "tiger face" design with results that fall between BMW’s twin-kidney grille and a menacing breathing strip. Other notable design cues include narrow headlights, sweeping amber running lights that wrap far around into the front fenders, a long hood and short, fastback-style rear deck. The K5 is longer, wider and less tall than the Optima it replaces. The Kia shares its N3 platform with its corporate cousin, the Hyundai Sonata. The K5 is 2.0 inches longer, 1 inch wider and 0.8 inch lower than the Optima. It’s wheelbase grew 1.8 in. to 112.2 ins. Power comes from a standard 180-hp 1.6L turbo or optional 290-hp 2.5L turbo. An eight-speed automatic is standard, with a sporty wet-clutch 8-speed dual clutch available with the 2.5L. Prices and fuel economy will be announced shortly. Kia will build the K5 in West Point, Georgia, alongside its wildly popular Telluride SUV. Contact Mark Phelan at @ mark_phelan . Read more on autos and sign up for our autos newsletter .