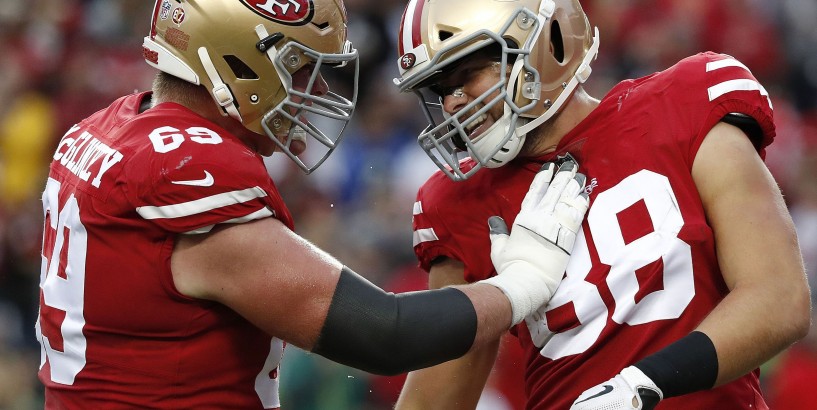 49ers rookie T McGlinchey in for another tough test vs. Mack

SANTA CLARA, Calif. (AP) — The schedule makers dealt Mike McGlinchey a rude welcome to the NFL. The rookie right tackle for the San Francisco 49ers had three of his first four games on the road, including matchups against elite pass rushers like Minnesota's Danielle Hunter, Kansas City's Justin Houston and Melvin Ingram of the Chargers.

Looking back at that experience now, McGlinchey acknowledges it was almost crippling.

"You could almost feel as soon as a pass play was called, 'Now I have to worry about getting off the snap on time. I have to worry about what he's going to do,'" McGlinchey recalled this week. "You could feel the stuff behind your eyes putting pressure on your face and you're just like all right. It's just one of those things you feel overwhelmed and growing inside you. You have to control it. I had solid games but nowhere near what it is now. I just wish I didn't have to worry about what I did being a rookie trying to impress everybody early on and just play football."

After that somewhat spotty start to his career, McGlinchey has found his groove and has justified the decision the Niners (4-10) made when they drafted him ninth overall to be a foundation piece of the offense.

San Francisco immediately traded incumbent tackle Trent Brown, one of the better pass blockers at the position, to New England and gave the starting job to McGlinchey.

Coach Kyle Shanahan said some rookies can't recover after being exposed early by top-level NFL players but that wasn't a problem for McGlinchey when he struggled at times against Ingram in Week 4.

"That never enters McGlinchey's mind," Shanahan said. "He thinks about what just happened, tries to get through it and I think him getting through that game and being able to make it through an injury and playing against a good player, that always gives guys confidence."

That confidence has built as the season has gone along and McGlinchey has been one of the better rookies in the league. His strong play has helped third-string quarterback Nick Mullens flourish in recent weeks and he has been a major part of a running game that was ranked in the top 10 in production for most of the season.

But he's still not satisfied.

"I'm not where I want to be and I'm not sure you ever are as a football player," he said. "But what I'm proud of this season is I've been stacking games together. Since a certain point of midway through the season I can feel myself getting better each and every week and taking things that I saw on tape last week or in practice and improving."

That's been particularly crucial during a recent stretch where McGlinchey and the 49ers have once again been matched up against a string of elite pass rushers.

San Francisco has matched up against Seattle's Frank Clark in two of the past three weeks, with a date against Denver's dynamic duo of Von Miller and Bradley Chubb in between. In all, the 49ers will have faced 10 of the top 13 leading sackers in the NFL this season after Sunday's matchup against Khalil Mack and the Chicago Bears.

As challenging as it was two weeks ago dealing with Miller's speed rush off the edge, McGlinchey will have even more to deal with against Mack, a player he called the best pass rusher in the NFL.

"It's completely different," he said. "(Mack's) bigger, he's stronger, he uses more power. With Von the challenge is staying in front of him. With Khalil it's just about everything. Von is in a class of his own in terms of get off. Khalil is so multiple with how he can rush. That's what his biggest strength is."

NOTES: S Jaquiski Tartt (stinger) will be placed on IR on Saturday and miss the rest of the season. ... Marcell Harris will once again start in his place.