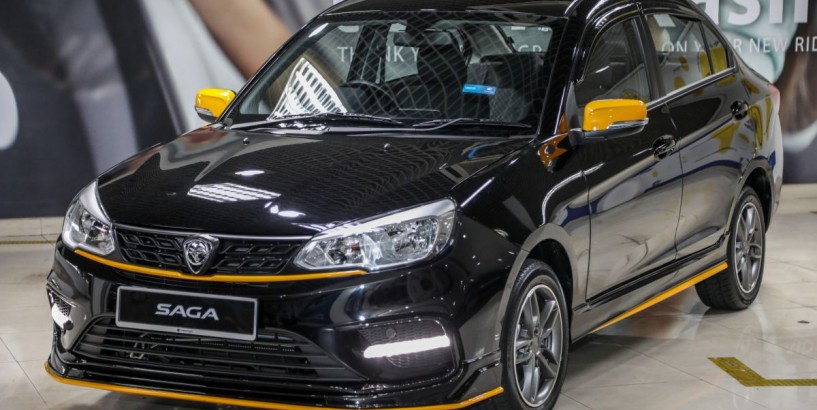 From L-R: The Saga AE with and without the optional bodykit

Happy birthday, Proton Saga! The first national car is 35 years old today , and Proton has released this car – the Proton Saga Anniversary Edition – to mark the milestone. We’ve had a good idea of what to expect from yesterday’s teasers; now here’s the car in full.

Internally called the “Black Edition”, the Saga Anniversary Edition (AE) is based on the Saga Premium AT range-topper, as with most special editions.

The car is in Quartz Black, which already makes it stand out as black is not in the regular car’s colour list. It’s the same black as that on cars Proton makes for the government, and the X70 Merdeka Edition ‘s roof. Black lah , basically.

From L-R: The Saga AE with and without the optional bodykit

The dark exterior is then accented with yellow highlights on the grille and lip portion of the front bumper. The yellow accents continue on the side skirts and wing mirror caps on the profile. At the rear, the lowest point of the bumper gets a yellow strip to mirror the front end. Why yellow? It’s a reference to Proton’s motorsports arm, R3.

Curiously, there’s no special “35th” logo anywhere. Speaking of logos, the Proton tiger emblem here is the old one with the shield and not the round one as seen on the CKD X70.

The five-twin-spoke 15-inch alloys (185/55 tyres) are in the same design as the Saga Premium, but here, they have a matte grey finish instead of the shiny look of the standard car.

Inside, the yellow-on-black theme continues. You can find the bright highlights on the instrument panel, the bezel of the smartphone tray below the air con vents and on the tips of all four AC vents as well. Also, the silver trim around the vents and the border of the touchscreen head unit have been replaced with gloss black. There’s also a new N95 cabin filter , which will be offered in the rest of the Proton range from now .

There are no mechanical changes to the A-segment sedan, which is powered by a 1.3 litre engine with 95 PS and 120 Nm of torque at 4,000 rpm. The comprehensive facelift of August 2019 replaced the old CVT with a Hyundai-sourced four-speed torque converter automatic. A five-speed manual is available in the entry Standard trim level. With the 2020 sales tax exemption , the sedan is priced from RM32,400 to RM39,300 for the Premium.

The good news is that this Saga Anniversary Edition, which is limited to 1,100 units, is priced the same as the Premium, which means this is yours for RM39,300 on the road without insurance.

However, do note that the bodykit, which consists of a front chin spoiler and side skirts (all three pieces house yellow stripes) is an option – you can add on RM2,035 for it (RM315 off the normal price of RM2,350). The bodykit can be fitted to all 2019 Sagas, but you can only have it in black/yellow, at the normal price.

The other new optional items included in the RM2,035/RM2,350 package are door visors, “NVH Guard” insulation foam for the bonnet and boot, and a plastic boot tray. All these are in the accessories gallery below. Also below are pics of the Saga AE without the optional bodykit. With the options, the Saga AE is priced at RM41,335.

By the way, here’s what they did for the Saga’s 25th anniversary 10 years ago. Black-roofed and leather-clad, the silver jubilee BLM was limited to 25 units and cost an eye-popping RM54,500 in 2010. What do you think of the Saga Anniversary Edition?