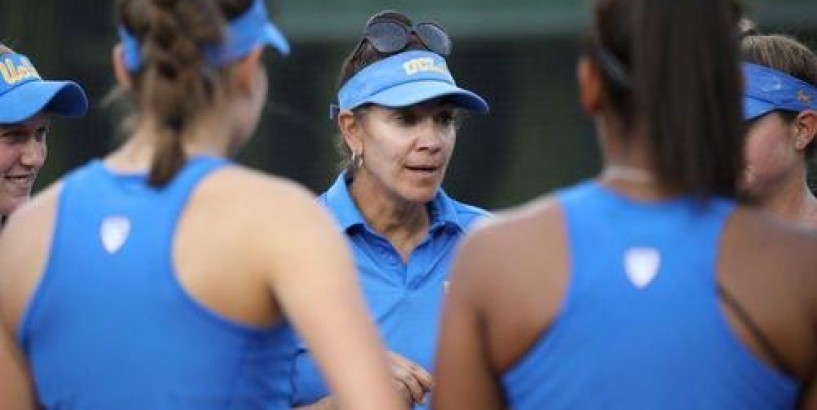 Sasha Vagramov clenched her right fist as cheers erupted. The sound of her teammates' footsteps intensified as fellow freshman Abbey Forbes enveloped Vagramov in a hug. The rest of the UCLA women's tennis team followed quickly.

As the Bruins bounced with excitement after a 4-0 victory over then-top-ranked Stanford in the semifinal of the national indoor championships on Feb. 9, Stella Sampras Webster got her answer to a pressing question.

Just how good could the Bruins be this year?

"The sky's the limit for this team," the coach said of the moment.

Poised for what could have been its best season since winning the national championship in 2014, UCLA was grounded suddenly amid the COVID-19 pandemic.

The No. 2 Bruins (12-1) were just beginning to take off. They advanced to the final of the indoor championships, losing to current No. 1 North Carolina 4-0. They beat conference rival Stanford - the four-time defending Pac-12 champion - twice in the same season for the first time in school history. The semifinal win in Chicago ended a six-match losing streak to the Cardinal.

So when they heard of the NCAA's decision March 12 to cancel all winter and spring championships, the Bruins immediately stopped practice and sat stunned. They thought about all they accomplished. And mourned for what they didn't get to finish.

"You feel the hurt in the players," Sampras Webster said. "It's still kind of surreal what is going on."

Sampras Webster spoke with shock in her voice about the situation. As much as she wrestled with the year's unfulfilling ending, the 24-year head coach also celebrated her team's successes. She repeatedly mentioned the wins against the Cardinal as if the Bruins had finally slayed their Stanford demons.

In each of the previous three matches against the Cardinal, UCLA took an early lead by winning the doubles point only to come up short in singles. The rivalry has "been on our back for a long time," Sampras Webster said.

The Bruins backed up their indoor championships win with a 4-1 victory on March 7, ending Stanford's regular-season conference winning streak at 38 and giving UCLA its road win in the series since 2014. It was UCLA's last match of the season.

With just one senior - Jada Hart - the Bruins expect to be back in the title race again. Sophomore Elysia Bolton and freshman Abbey Forbes formed a formidable one-two punch at the top of the singles lineup as the underclassmen had a combined 17-4 record in dual singles matches.

Hart selflessly stepped back from the No. 1 singles position, where she earned All-American status last year, and went 7-2 in dual matches at No. 3 singles this season.

"She understood wherever I was going to put her, she was going to take the responsibility and try to win that point for us," Sampras Webster said of Hart. "A great example of a team player."

Hart was also a doubles All-American in 2018. The points she won in both singles and doubles will be hard to replace, Sampras Webster said, but the coach believes her returners will "be hungrier and better in wanting to continue the journey that we've been having" after the season's abrupt end.

"They definitely had a fighting spirit that you want in your teams that they just know how to win," Sampras Webster said. "They showed they have championship mentality."