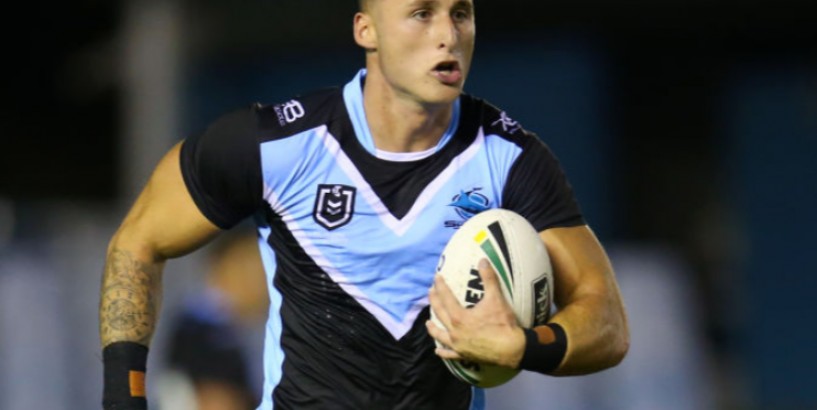 BRONSON XERRI of the Sharks runs the ball during the NRL Trial match between the Cronulla Sharks and the Manly Sea Eagles at Shark Park in Sydney, Australia. Picture: Jason McCawley/Getty Images

The NRL has backed the officials behind the decision to award Cronulla flyer Bronson Xerri a match-winning try on Sunday, with head of football Graham Annesley labelling criticism of the decision misguided.

Xerri's try gave the Sharks a crucial 18-12 win against St George Illawarra but it was clouded in doubt after replays showed the ball appeared to brush teammate Wade Graham's hand before it arrived with Xerri.

The youngster sped away to put them ahead with four minutes to play and the decision was upheld on review.

Graham admitted post-game that he may have got lucky, confirming it had touched his arm.

But Annesley said that was no grounds to bag the decision.

At his weekly Monday briefing, Annesley played audio of the deliberations in the bunker during the review of Xerri's try to show that officials had also determined he touched the ball, as Graham admitted post-game, but that it had travelled backwards from the touch.

"All the criticism levelled at the video referee in this decision is ill-informed," Annesley said in giving his decision-makers a pat on the back.

"It's a good demonstration of how conclusions can be reached that aren't necessarily based on fact."

"It demonstrates the values of reviews, how we do them and how close they can be."

Annesley also explained at his Monday briefing why Canberra forward Dunamis Lui was forced off injured ahead of a scrum against Melbourne.

He said the rules around scrum-time injuries meant players needed to leave the field until a break in play to be interchanged or not to return until the next stoppage or when their team regains possession.

Annesley said the rule was designed to stop players feigning injury to slow the scrum from being formed and give their team some respite.

The former referee didn't bite when asked for his thoughts on Melbourne's tackling tactics, which have again come under the spotlight in recent weeks.

He said accusations of illegal techniques weren't just confined to the Storm and it would be unfair to perpetuate that.

"Every game's different ... irresponsible for me to say any team is more at fault at breaching the rules than any other team," he said.

"They can only be assessed on what they do on the field.

"The match review process is there to ensure players play within the right spirit of the game ... and if they don't they suffer the consequences."