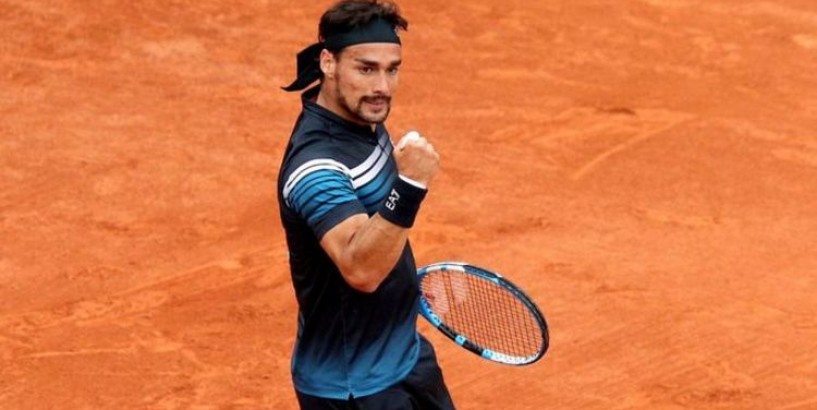 Fabio Fognini says it is his dream to play in the French Open final against his 'idol' Roger Federer. Fognini has an underwhelming record at the Grand Slams, with just one quarter-final appearance in 48 attempts.

Related articles Roger Federer breaks silence on coronavirus outbreak in first message Novak Djokovic & Rafael Nadal would struggle if Wimbledon had no fans The solitary last-eight result came in 2011 when he was forced to withdraw from the match against Novak Djokovic.

But clay is the Italian's favourite surface and in 2019, he won a maiden Masters 1000 titles at Monte Carlo.

With Rafael Nadal and Djokovic still on the scene, it will be a tall order for Fognini to reach a final, let alone win it.

While Federer missed the French Open three years in a row before reaching the semi-finals last year.

Fabio Fognini is yet to win a Grand Slam (Image: GETTY) Nevertheless, speaking in an interview with Sky Sports Italia, Fognini didn't waver from his ideal scenario.

He said: "I would like to play a Grand Slam final against Roger, my idol.

"If it happened at Roland Garros, it would be really the best, even if he has missed it a couple of times in the last few years."

It remains to be seen if Fognini will get his wish this year following the French Tennis Federation's decision to move the tournament to September.

Fabio Fognini is an admirer of Roger Federer (Image: GETTY) READ MORE Roger Federer: Heinz Guenthardt dismisses importance of Laver Cup The rescheduled event is due to take place a week after the men's singles final at the US Open and it will also fall at the same time as Federer's Laver Cup exhibition in Boston.

Laver Cup officials have already stated their determination to hold the sold-out event which leaves Federer in an awkward position.

"No certainly not," Guenthardt said when asked he thought Federer would be reluctant to postpone the Laver Cup.

"You will never bring everyone together, unfortunately, and reach an agreement. And there are not many alternatives either.

"If you had the choice as a tennis fan: Laver Cup or Roland Garros, which would you choose? In Paris, 128 men and 128 women play in the main field alone, plus qualifications and doubles.

"There are about a dozen players at the Laver Cup. The ATP is a player association, it must act accordingly. Especially because the players in the lower ranks are now dependent on the money of the French Open."