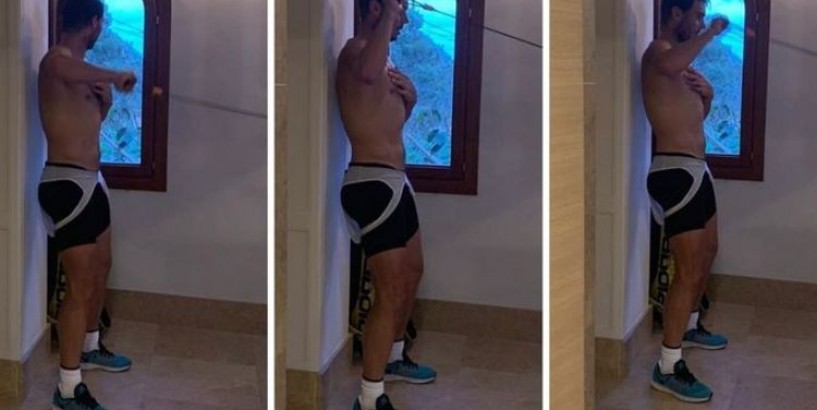 Rafael Nadal may not be able to train outside like usual but he is still making sure to keep up his physical level inside his home in Mallorca.

Related articles Nadal plan backed after ATP rankings freeze slows Djokovic chase Roger Federer and Rafael Nadal in disagreement with Novak Djokovic The world No 2 has been in his home for two weeks since returning from the United States following the cancellation of the BNP Paribas Open at Indian Wells.

The cancellation was soon followed by the suspension of all tennis competitions until April before last week it was extended to June 8.

It meant Nadal is unable to play during his favourite time of the year - the clay-court season.

The Spaniard may still have a chance to win a record-extending 13th French Open title after the Grand Slam was moved to September.

The hard work does stop for Rafael Nadal (Image: Instagram) For now, the 33-year-old has to wait and see to discover when tennis will resume.

And in the meantime, with Spain is on lockdown, Nadal must stay indoors to work on his fitness and stay sharp.

In a picture posted on his Instagram , a shirtless Nadal is seen exercising and working on his upper body.

Nadal has long been one of the best-conditioned players on the tennis tour so when tennis does continue, expect him to be close to his best very quickly.

Rafael Nadal last played at the Mexican Open in Acapulco (Image: GETTY) READ MORE Djokovic joins Nadal & Federer in posting coronavirus message to fans On Wednesday, it was announced Spain had overtaken China with the second-highest number of coronavirus deaths.

Infections in Spain are said to have risen by 20 per cent from the previous day to over 47,600.

A vote on whether to extend the state of emergency by another two weeks until April 11 is likely to be passed.

“If we are not already at the peak, we are very close,” he said. “I cannot say that we have reached it.”