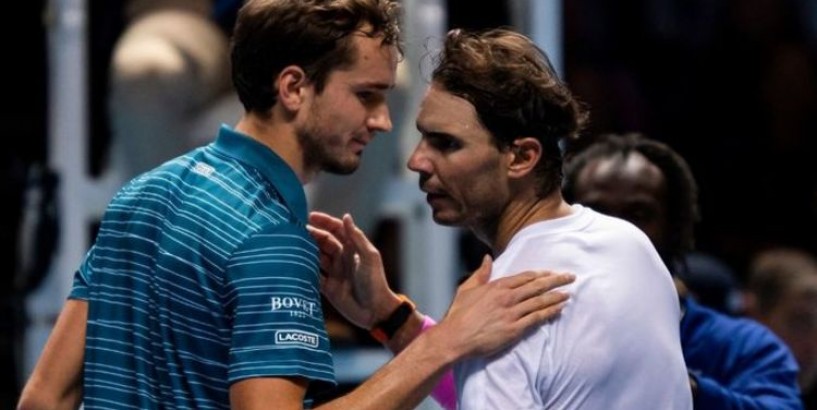 Daniil Medvedev says he hopes to never lose his way again as he did at the ATP Finals to Rafael Nadal last year. After a sparkling summer which saw him reach three consecutive finals, Medvedev made it through to a fourth at the US Open against Nadal.

Related articles Rafael Nadal set golf challenge by Mardy Fish after audacious shot Rafael Nadal: US Open pull out claim made after French Open decision And the two men played out one of the best US Open finals in its history as Nadal led two sets to love before Medvedev mounted a stirring comeback in front of a raucous crowd inside Arthur Ashe Stadium and forced a final set decider.

Ultimately, Nadal would come through 6-4 in the fifth and win his 19th Grand Slam title.

Nevertheless, Medvedev had delivered a statement of intent to challenge regularly for the biggest prizes in tennis.

The two men would meet again in the group stages of the season-ending ATP Finals at the O2 Arena in London.

Daniil Medvedev missed a golden chance to beat Rafael Nadal at the ATP Finals (Image: GETTY) The loser of the match knew they would be exiting the tournament while the winner would still have a chance and after splitting the first two sets, Medvedev put himself in touching distance of winning as he led 5-1.

The Russian had a match point on Nadal’s serve at 5-1 but failed to take it and it proved costly as the Spaniard staged a fightback of his own to get level.

After such a strong summer, it was a disappointing end to a breakthrough season for Medvedev.

Daniil Medvedev is determined not to make the same mistake again (Image: GETTY) READ MORE Novak Djokovic & Rafael Nadal would struggle if Wimbledon had no fans Speaking in an interview with Tennis Magazine, Medvedev opened up about that match with Nadal and vowed to complete the job on his next opportunity.

"I should have played better, especially in the most important moments of the match," he said.

"I still remember that painful defeat against Rafa where he managed to win with a very adverse result.

"I hope I never miss an opportunity like that again.

Related articles Federer, Nadal and Djokovic plan for French Open examined ATP Rankings freeze: Djokovic remains top, Nadal & Federer boost "Despite everything, the experience was very good, since playing such a tournament is a fantastic thing for any tennis player.

"It is a unique tournament. I will work hard to get back there."

In the ATP 'Race to London', Medvedev is 15th in the standings and will need another strong run in the summer to play in the ATP Finals this year.