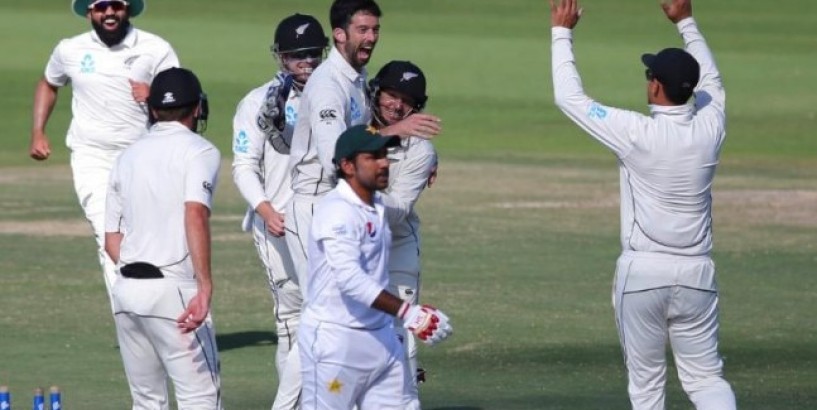 Last month, New Zealand had won a thriller at the same venue to take a 1-0 lead after the first Test. But Pakistan bounced back to win the second Test in Dubai by an innings and 16 runs.

Back in Abu Dhabi for the third and final Test, Pakistan had the upper hand for the first half of the match. They had bowled New Zeaand out for 274 and looked set for a big total before debutant William Somerville picked up four wickets to stall Pakistan's progress.

Pakistan finished with a first innings lead of 74 runs. Kane Williamson, who was the top scorer in the series then struck a fine hundred and added 212 for the fifth wicket with Henry Nicholls.

Chasing 280 on the final day, Pakistan got off to a disastrous start, losing openers Mohammad Hafeez and Azhar Ali by the 12th over. Somerville snuffed out Harris Sohail and Asad Shafiq off successive delivers before Imam-ul-Haq perished Ajaz Patel - tottering at 55 for 5 with plenty of time left, there was little hope for Pakistan.

New Zealand claim a famous 2-1 series win in the UAE!

Pakistan are dismissed for 156 and the Blackcaps win by 123 runs - it's their first Test series win in Asia since 2008, their first away to Pakistan since 1969! #PAKvNZ scorecard https://t.co/cS8PI6iRJl pic.twitter.com/66tmPxirHh

Babar Azam looked like the only Pakistani batsman determined to put up a fight but he had no support from his skipper Sarfraz Ahmed and the tail enders.

It was New Zealand's only fifth series victory in Asia and first in 10 years, while Pakistan lost only its second Test series in the United Arab Emirates in the last decade.

New Zealand won the first Test by four runs on the same ground, and lost the second in Dubai by an innings.