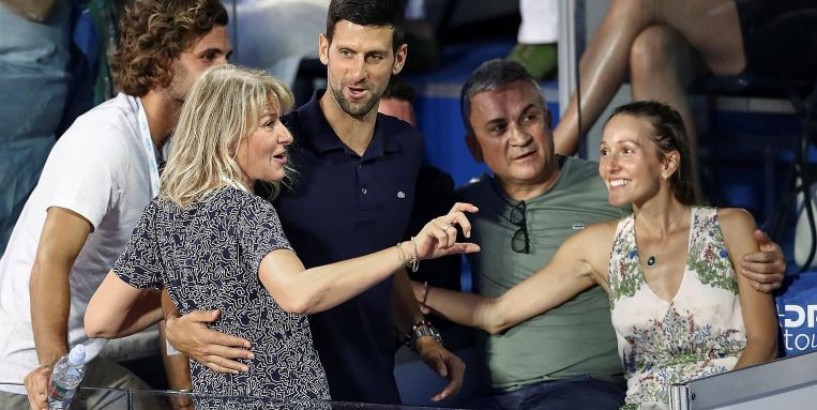 PARIS • World No. 1 Novak Djokovic said yesterday that he has tested positive for the coronavirus, joining three other infected players who took part in his exhibition tennis tournament in the Balkans.

Grigor Dimitrov, Borna Coric and Viktor Troicki had all tested positive for Covid-19 on Sunday and Monday after taking part in the Adria Tour, which had a daily crowd of 4,000 at Djokovic's tennis centre in Belgrade last week.

The 33-year-old Serb revealed that he and his wife, Jelena, had both been infected by the disease after taking a test immediately upon returning to Belgrade from Zadar, where the final of the tournament last Sunday was cancelled following Dimitrov's positive test.

In a statement on his website, Djokovic said: "My result is positive, just as Jelena's, while the results of our children are negative.

"We organised the tournament at the moment when the virus has weakened, believing that the conditions for hosting the Tour had been met. Unfortunately, this virus is still present, and it is a new reality that we are still learning to cope and live with.

"I am extremely sorry for each individual case of infection. I hope that it will not complicate anyone's health situation and that everyone will be fine.

"I will remain in self-isolation for the next 14 days, and repeat the test in five days."

The Adria Tour witnessed players hugging, giving each other high-fives, playing basketball, posing for pictures and attending press conferences together.

Djokovic also organised nights out in Belgrade for the players and pictures and videos of him dancing with the other participants at his event were posted on social media.

With both Serbia and Croatia easing lockdown measures weeks before the event, players were not obliged to observe social distancing rules in either country.

But the response over the lack of precautions from some in the fraternity has been swift and severe.

Related Story Tennis: Coric and Dimitrov apologise after testing positive for coronavirus during Djokovic's event Related Story Not a joke: Djokovic event under fire after Covid-19 cases "I sum it up as a horror show," Bruno Soares, a member of the ATP Player Council, of which Djokovic is president, said in an interview with GloboEsporte.

"Enormous irresponsibility and huge immaturity. They were totally careless, and it's difficult for me to find the words."

Former player Patrick McEnroe, who has recovered from the coronavirus, slammed Djokovic for partying with many still suffering worldwide. He said: "You've got to be aware of who you are and lead by example."

When the US Open first announced its plans to protect players from the virus by limiting the size of entourages and restricting players' movement, Djokovic was an outspoken critic of the idea, calling the plan "extreme".

But the risks of taking a less cautious approach are now clear, particularly in a sport with international players who have to travel.

"Hopefully people will be able to discern that this isn't an issue with the concept of returning to tennis but of how you return to tennis," said Mark Ein, the owner of the Citi Open in Washington, which is scheduled to be the comeback event for the ATP Tour in August.

"Even if places feel safe, it's still prudent to take basic precautions."

Andrea Gaudenzi, the ATP chairman, said the tour had recommended that players competing on the Adria Tour and in other unsanctioned events take "proper precautions and respect social distancing". But it had no jurisdiction to impose safety regulations.

The governing body added that it will implement a variety of protocols that would be adjusted as and when dictated by the latest medical information, to ensure safety when the tour resumes.