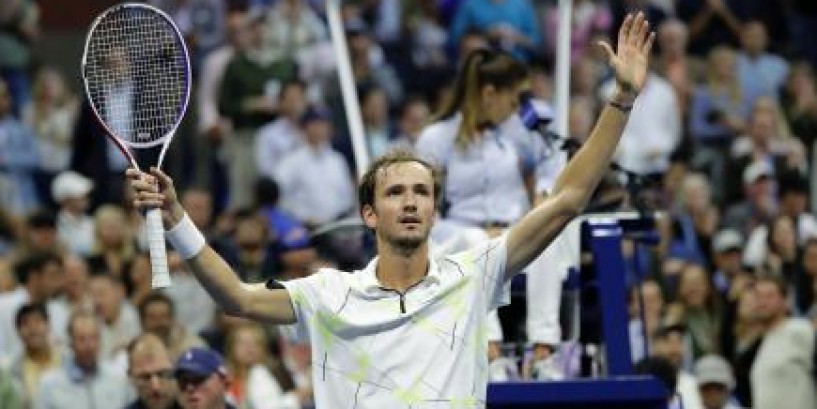 Daniil Medvedev reached his first grand slam final and won over a hostile crowd in the process at the US Open.

The eccentric and controversial Russian, who defiantly blasted his way through the draw to a backdrop of jeers from the stands, overcame Grigor Dimitrov in the semi-final.

Medvedev became the villain of the piece in the third round when he snatched a towel from a ballboy and then gave the crowd the middle finger, before goading them in his post-match interviews throughout the fortnight.

But after beating Dimitrov in straight sets to make Sunday’s showpiece, the 23-year-old declared: “I love the USA!”

Dimitrov, who knocked out Roger Federer, will wonder how he lost the opening set, while the second set featured some of the most compelling tennis of the championships.

The fifth seed has been playing through the pain of a thigh injury, which was heavily taped up, as was his right shoulder.

Not that anyone would have know it as he swatted away Dimitrov’s opening service game to love.

Dimitrov, 28, began to find his range and, in particular, his forehand. He broke back and even manufactured a set point, but it went to a tie-break and, amid a flurry of errors from both players, Medvedev pinched it.

Dimitrov, probably the biggest surprise in a refreshingly curious semi-final line-up – this match was supposed to be Novak Djokovic against Federer – had lost seven of his previous eight matches before the tournament.

In a pivotal second set full of punishing long rallies, the former world number three, currently languishing at 78, broke early but immediately handed the initiative back, Medvedev winning three on the spin.

Dimitrov levelled again and was playing the more aggressive game, but Medvedev has developed an uncanny knack of winning the points that matter, and after two hours the Bulgarian had lost two sets he really should have won.

The momentum was with the Russian player and although Dimitrov saved two match points on serve, Medvedev got the job done on his own serve to seal his maiden appearance in a major final.

“I have to tell you that sounds not bad,” he said afterwards. “As I said before, the tournament of controversies.

“Finally I’m here after three sets. I’m just happy to be in the final.

“When I was going to the USA, I didn’t know it would be this good. I have to say I love the USA!

“If someone had told me it wouldn’t be easy because of cramping in the first rounds, or with the crowd in the third round, I would have thought I was going home.