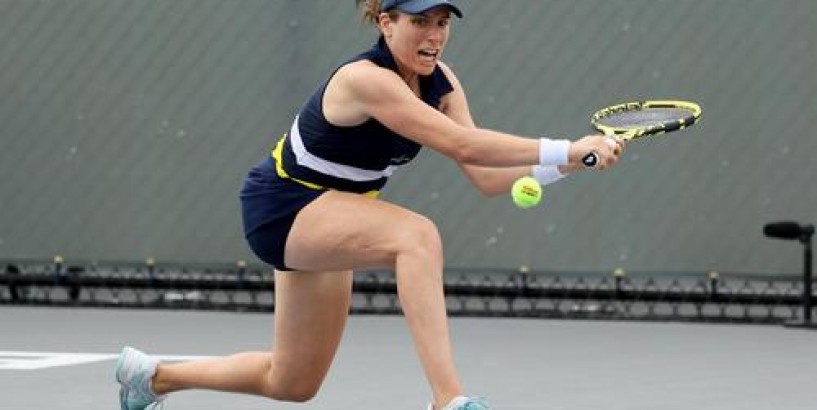 Johanna Konta suffered a heart palpitation on her return to the match court on Monday, forcing her to stop play at an early stage of her straight-sets defeat against the Czech Republic's Marie Bouzkova.

The tournament in Lexington, Kentucky, was being played in extremely humid conditions after earlier rain, and Konta called the doctor to the court after only a few minutes of play. She kept holding two fingers to her throat to check her pulse.

"I sometimes have heart palpitations," explained Konta, who was able to resume after a few minutes and eventually went down to a 6-4, 6-4 defeat. "My heart rate shoots up for no reason, we didn't have a long point, I wasn't gassing in any way in my lungs. It makes me a bit lightheaded, I just had to see the doctor and the physio.

"I was having all the checks. I am as fit as a fiddle but it can happen. It took a while to settle down until about 4-3 in the first set, but then it did settle down and I was able to concentrate on the tennis.

"This was the fourth time it's ever happened. The first time was in Birmingham in 2017, the second time in Beijing in 2018 in an evening match that I played. The third time was two months ago, in a training block on the clay. I wouldn't say there's a massive common denominator.

"I am worried. It's not ideal. I am going to have another test, and hopefully measure it. But probably now it won't happen again for another year or something."

In the tennis itself, Konta played a surprisingly high level for a woman who was suffering such alarming physical symptoms but could not overcome a fast and mobile opponent. This was her first match since lockdown, and ironically her last match before lockdown was also a straight-sets defeat to Bouzkova.

Meanwhile, at the same tournament, Heather Watson began her own post-lockdown season with a straight-sets defeat to America's Jennifer Brady. And several more women joined the list of US Open refuseniks on Monday, including two-time slam champion Svetlana Kuznetsova.