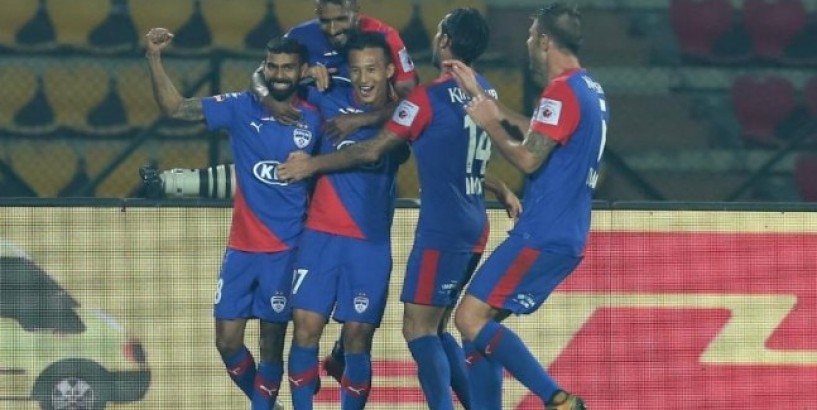 Bhutanese striker Chencho Gyeltshen ensured a point for Bengaluru (ISL Photo) HIGHLIGHTS Federico Gallego's 64th minute had put NorthEast United ahead But Chencho Gyeltshen cancelled out NorthEast's lead in injury time The first half saw two shots on target from the home side and just one for the away team Bengaluru FCs unbeaten start to the Indian Super League (ISL) remained intact after a dramatic 1-1 draw against NorthEast United FC at the Indira Gandhi Athletic Stadium here on Wednesday.

After a tightly-contested first half, Eelco Schattorie's side took the lead through Federico Gallego (64th minute). However, a late acrobatic effort from Bhutanese striker Chencho Gyeltshen ensured a point for Bengaluru.

The result sees Bengaluru FC preserve their four-point advantage over NorthEast United at the top of the table.

The first chance fell for the home side when Lalthathanga Khawlring threaded a through ball for Redeem Tlang but the latter's shot was just about kept out by an onrushing goalkeeper Gurpreet Singh Sandhu.

From the ensuing corner, Bartholomew Ogbeche, who was under pressure from Xisco Hernandez, managed to head it straight at the Bengaluru custodian.

It was a scrappy game with both teams struggling to dominate the midfield. While Pawan Kumar in goal looked shaky each time the ball was played to his feet, the visitors survived a couple of close offside calls against Ogbeche at the other end.

The first half saw two shots on target from the home side and just one for the away team.

Carles Cuadrat changed the way his side lined-up after the break with Harmanjot Khabra moving to the right-back position with Rahul Bheke on the opposite flank.

But it was NorthEast who had a chance when Ogbeche and Rowllin Borges combined with the former sending a cross into the box which was cleared by Eric Paartalu straight into the hands of the Bengaluru custodian.

The breakthrough eventually came in the 64th minute as Federico Gallego found a way past the Bengaluru defence. Ogbeche played a ball to the left when Gallego was left in a lot of space. He sidestepped Albert Serran to slot it home as the ball took a deflection off Gurpreet to find its way in.

In the 66th minute, Bengaluru couldn't clear their lines and Gurpreet had to come off his to clear the ball. However, he fouled Ogbeche in the process and earned a yellow card. From the ensuing free-kick, Ogbeche's effort was blocked as Bengaluru survived yet another scare.

Cuadrat immediately substituted Serran and brought in Chencho in order to bolster their attack. However, it was Schattorie's team who looked threatening every time they ventured into the opposition half.

Bengaluru came close in the 88th minute when Khabra's cross was chested down by Xisco for Chencho and the Bhutanese striker's shot sailed over.

However, Chencho wasn't going to be denied for the second time as his acrobatic kick after getting on the end of a Chhetri header helped his side find the equaliser.