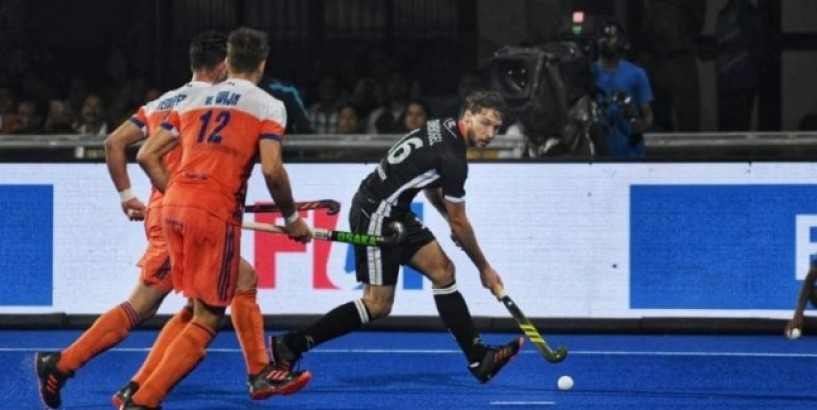 Germany started to dominate the proceedings from the second quarter onwards (Hockey World Cup Twitter) HIGHLIGHTS Germany crushed the Netherlands 4-1 in a completely one-sided Pool D affair Germany became the first team in this edition to earn direct qualification into the quarters In the other Pool D match, Malaysia scored a late equaliser to hold Pakistan 1-1 Germany thrashed fellow European heavyweights Netherlands 4-1 in a completely one-sided Pool D affair to confirm a quarter-final spot at the ongoing 2018 Hockey World Cup at the Kalinga Stadium here on Wednesday.

After this thumping win, Germany topped Pool D charts with two wins from as many games and six points in their kitty, while Netherlands are placed second with three points, followed by Pakistan and Malaysia.

The two-time champions thus became the first team in this edition to earn direct qualification into the quarter-finals.

Mirco Pruijser drew first blood for the Dutch in the 13th minute. However, they failed to extend their lead as the Germans gradually started to dominate the proceedings from the second quarter onwards.

Germany's Mathias Muller found the back of the net to bring his team back on level terms in the 30th minute.

After a goalless third quarter, the fourth and final period saw Germany completely dominating their opponents as Lukas Windfeder's powerful dragflick into the bottom right corner made the issue 2-1 in the 52nd minute.

In the other Pool D match later in the evening, Malaysia scored a late equaliser to hold Pakistan 1-1.

Both teams thus opened their accounts in the pool table as they now have one point each after two matches. Malaysia had suffered a 0-7 humiliation to Holland in their campaign opener while Pakistan had fought hard before going down 0-1 to a sluggish Germany.

The result leaves both needing to win their respective last pool matches and hope for a favourable result in the other game.

While Malaysia will face title contenders Germany in their last match, Pakistan are expected to face an uphill battle against formidable Netherlands. However, a superior goal difference gives Pakistan an advantage over Malaysia.

Pakistan dominated possession but the well-organised Malaysian defence did well to hold them at bay and create occasional scoring chances with fast counter-attacks.

Atiq Arshad gave Pakistan the lead when he scored a field goal off an excellent pass from Mohadmmed Rizwan (senior) in the 51st minute.

The experienced Faisal Saari restored parity for Malaysia in the 55th minute when he powered home a well-placed penalty corner.

Pakistan continued to put pressure on the rival defence in the dying minutes but the Malaysians did well to defend sturdily and hold on to earn a point.