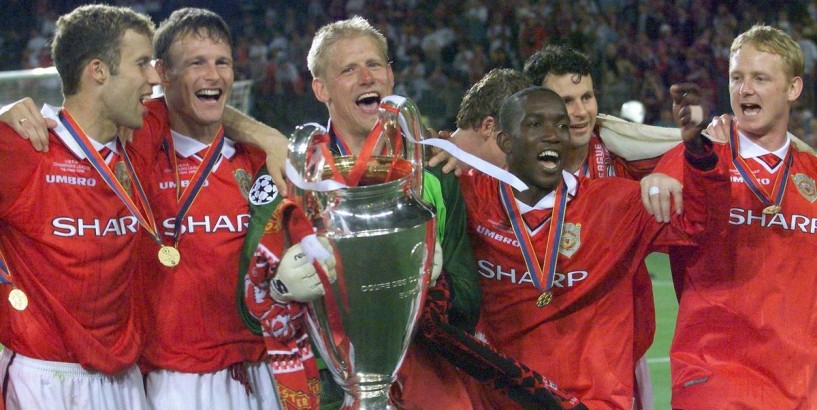 What happened to Manchester United's Champions League winners from Barcelona 1999

Share By Colin Millar 05:30, 26 MAY 2020 Sport Manchester United's 1999 heroes celebrate after the Bayern Munich win (Image: ERIC CABANIS/AFP via Getty Images) Sign up to FREE email alerts from Manchester Evening News - Manchester United FC Subscribe When you subscribe we will use the information you provide to send you these newsletters. Sometimes they’ll include recommendations for other related newsletters or services we offer. Our Privacy Notice explains more about how we use your data, and your rights. You can unsubscribe at any time. Thank you for subscribing We have more newsletters Show me See our privacy notice Invalid Email “Manchester United have reached the promised land!”

The words of Clive Tyldesley - delivered moments after Ole Gunnar Solskjaer netted the winning goal in the Champions League final - have been etched into football folklore.

Sir Alex Ferguson’s side won the European title in the most dramatic possible manner with two late goals against Bayern Munich and secured an historic treble.

With every passing year, United's achievements have been amplified with star-studded teams unable to triumph in all three primary tournaments in the same campaign.

We take a look at where United’s heroes from that night are now.

Peter Schmeichel - The great Dane played his final game for United at the Camp Nou, and went on to play for Sporting CP, Aston Villa and, somewhat controversially - Manchester City. He worked as a TV pundit for TV3 in Denmark and occasionally British media and hosted a show on Russia Today. His son Kasper is now a star goalkeeper for Leicester City and Denmark.

Goalkeeper Peter Schmeichel and forward Dwight Yorke celebrate United's Champions League win (Image: ERIC CABANIS/AFP via Getty Images) Ronny Johnsen - Another of the Scandinavian grouping at United, the Norwegian central defender now works as a club ambassador. Johnson was one of just four players to start in the three decisive fixtures that season - against Tottenham in the Premier League, the FA Cup final against Newcastle and this clash. Went on to have stints at Aston Villa, Newcastle and Valerenga.

Gary Neville - The right-back spent the entirety of his career at his boyhood club and remains one of English football’s most influential figures in retirement. A prominent pundit on Sky Sports, Neville was also an England coach under Roy Hodgson and had an ill-fated spell in charge of Valencia in the 2015/16 campaign. Also is invested in plenty of businesses, including part-ownership of League Two club Salford City and Hotel Football.

Jaap Stam - The Dutchman left United in acrimonious circumstances after a prominent fallout with Ferguson after comments in his 2001 autobiography. Played for Lazio (where he was banned for doping offences) along with Milan and Ajax, before retiring in 2007. Ferguson later admitted this was a “mistake”, and Stam later returned to the club in a scouting position. Has subsequently managed Reading, PEC Zwolle and Feyenoord.

Read More Manchester United win the Treble in 1999 Why 1999 Treble team is the greatest What happened to the 1999 heroes Pictures: 1999 Champions League win Denis Irwin - Clocked up 529 first-team appearances for United across 12 seasons and was ever-dependable at full-back and a set-piece specialist. Another ambassador for the Reds, who also occasionally works on club channel MUTV. Played alongside former teammate Paul Ince at Wolverhampton Wanderers in the final two seasons of his career, with Ferguson constantly referencing how he would command a place in his strongest ever 11.

David Beckham - The most famous footballer both inside and outside the game, Beckham was another to fall out with the club boss and was sold to Real Madrid in 2003 for £24.5million. He infamously received a flying boot to the face after Ferguson kicked the item in anger in an FA Cup defeat to Arsenal that same year. Also went on to play for LA Galaxy, Milan and Paris Saint-Germain and won 115 international caps. Now co-owns MLS franchise side Inter Miami and has a stake in Salford City.

Nicky Butt - Now head of United’s academy, Butt started the final in place of suspended captain Roy Keane - whose immense performance in the semi-final against Juventus helped secure the final place. The local midfielder, part of the club’s ‘Class of 92’, left for Newcastle United in 2004 and had brief stints at Birmingham City and South China. Butt, who won 39 caps for England, also part-owns Salford.

Ryan Giggs - The Welsh wizard’s most memorable moment this season was his incredible solo goal against Arsenal in the FA Cup semi-final, but he delivered the pass for Teddy Sheringham’s equaliser in Barcelona. Won 13 league titles and two Champions League triumphs in a remarkable 23-year career at Old Trafford. Giggs went on to become caretaker boss and number two under Louis Van Gaal, before replacing Chris Coleman as Wales boss in 2018.

Read More Related Articles Clive Tyldesley on his Man Utd Champions League final fear and Ferguson meeting Jesper Blomqvist - The Swedish midfielder would not play again for United after this final after suffering complications with a serious knee injury - meaning he could not play for two years, having spells with Everton and Charlton Athletic before returning to his native country. Made 38 appearances in the treble season, having joined from Parma, and started the showpiece due to the absence of Keane and Paul Scholes. Post-retirement, he won Sweden’s Strictly Come Dancing in 2017 and runs a pizza restaurant in Stockholm.

Dwight Yorke - Having signed from Aston Villa the previous summer, the Trinidad and Tobago striker was United’s top scorer in 1998/99 with 28 strikes. Would later become a United ambassador, alongside various punditry positions, having ended his playing career with stints at Blackburn Rovers, Birmingham City, Sydney and Sunderland - where he played under former teammate Keane.

Andy Cole - Was replaced by Solskjaer in the closing stages, Cole played a big part in the title - his winner in the semi-final against Juventus was one of his 24 goals that season. Left United for Blackburn in 2001 and also played for Fulham, Manchester City, Portsmouth, Sunderland, Birmingham, Burnley and Nottingham Forest. Most recently, he has been a member of Sol Campbell’s coaching staff at Macclesfield Town and Southend United. His son Devante currently plays for Doncaster Rovers.

Substitutes : Ole Gunnar Solskjaer - Needs no introduction, the current United boss scored the club’s most famous goal to defeat Bayern Munich that night. Retired from playing in 2007 after 11 years at the club following a knee injury. Coached United reserves before managing his former club Molde in Norway, with an unsuccessful stint at Cardiff in 2014, and replaced Jose Mourinho at United, initially as a caretaker, in December 2018.

Teddy Sheringham - Like Solskjaer, Sheringham made a huge impact from the bench as he netted the equalising goal - one of his 372 goals in professional football. Had unsuccessful stints as a manager at Stevenage and ATK in India. Now another United ambassador.