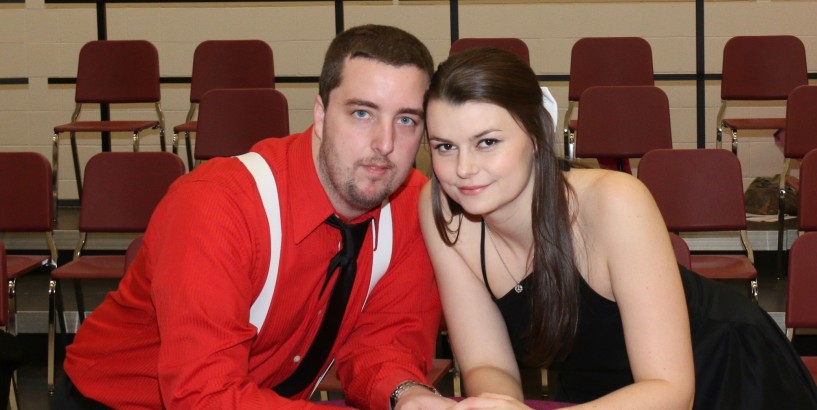 A dental hygienist, on a spring day, gave the first endorsement. Christina Allen was in a dentist's chair 14 years ago, settling in to have her teeth cleaned, when her flip phone buzzed and she realized it was a text message from a guy she had met in chorus at Niagara-Wheatfield High School.

On May 9, 2006, he used that text to ask her for a date, a request the 15-year-old Allen kind of hoped might be coming. She showed the hygienist the text, as well as a photograph of the young man. The hygienist gave her approval in all ways, before offering a question.

“Will you say yes?” she asked Allen.

Allen did, punching the same word into her flip phone that she will be asked to say Saturday, on a wedding day chosen specifically because it is again May 9.

“I think we’re both kind of stubborn people,” O’Toole said, explaining why the ceremony will go on despite the pandemic.

But the larger backdrop gives this one a special power.

Start with this, above all else: Allen, a physician, was working with Covid-19 patients and others in crisis until last week at Buffalo General Medical Center, and she will return there as soon as her break for marriage comes to an end.

She is doing her residency for internal medicine at the University at Buffalo’s Jacobs School of Medicine and Biomedical Sciences. While that duty sent her to rotations at several area hospitals in the past few months, the experience at Buffalo General has been especially intense.

Allen, 29, has helped in treating plenty of men and women needing emergency care unrelated to the virus. She has also interacted with patients who later died in this pandemic, patients whose only immediate companionship in their last days came from the medical staff around them.

“It hurts,” Allen said, explaining why she wills herself to focus on quiet victories.

Her choice of careers was influenced by nurses in her family – especially her mother, Patricia Evans. Allen said one of the most unforgettable aspects of emergency care at Buffalo General is the dedication, warmth and courage of the nurses, who provide high-level care despite facing daily hazards.

“They’re just pretty amazing,” said Allen, moved by what she described as the privilege of witnessing moments of almost reverential power.

For Covid-19 patients at the hospital fighting for their lives, the most terrifying crossroads is learning they are being placed on ventilators, which comes with understanding of the high level of their danger. Despite the risks, some patients begin to recover and are eventually extubated, meaning they can again breathe without the machine.

What the extubation process demands, Allen said, is bringing patients who have been sedated back to enough consciousness to allow them to draw in their own breath. At that instant, she said, they are often aware of the full power of what is happening, and – while they are not yet beyond danger – they understand they have a fresh and renewed chance to survive.

Each revelation, amid the hardship all around them, is like a sunburst.

“There are good moments and bad moments,” Allen said, “but you have to go in thinking every day is going to be a good day."

O'Toole, 28, who works for Broadleaf Results in Buffalo, said he does his best to listen and provide comfort for his fiancee at a time when he appreciates that doctors and nurses are shouldering heavy burdens on behalf of the larger community. He remembers times when Allen provided him with similar support, fitting a connection based from the start on mutual respect.

He and Allen both speak in vibrant detail of that 2006 text message, leading to their first date. They were high school underclassmen who had met at chorus, held at the end of the school day at Niagara-Wheatfield. Soon, they were walking out the door together once classes were over, a connection that turned into something more following the text and a subsequent movie, "Ice Age: The Meltdown."

They stayed together through high school, always a couple at proms and other big events. Afterward, Allen attended UB – her original goal of being a pharmacist soon evolving into plans to be a doctor – while O'Toole decided to enlist in the Air Force.

For a while, they put their relationship on hold, a quiet test to see if it would withstand separation, but they discovered their friendship only intensified. They exchanged letters as O'Toole moved through basic training, staying in close touch even as he was deployed to Kuwait and Allen’s schooling took her to Canisius College and then to Erie, Pa.

By the time Allen was in her third year of medical school, O'Toole was home and it was again a full-blown romance, which soon led into conversations about marriage. They were sentimental enough to have their engagement photos taken in the Niagara-Wheatfield chorus room. From the start, they knew the date for exchanging vows before they knew the year:

The wedding had to be May 9, the anniversary of the moment when they began dating, and it had to be on a Saturday.

Looking at the calendar, that meant 2020. The original plan was for a packed church ceremony and a blowout at Statler City, followed by a honeymoon that would include the Grand Canyon. But the pandemic put an end to all of that. The reception is off until at least September, and they could have made the same choice to postpone the wedding.

The nature of Allen's work only reinforced her commitment to sticking with Saturday as the big day.

"I think," she said, "people always need a little hope.”

While the church will hold only a tiny handful of family members, the couple is still planning on a celebratory ride in a horse-drawn carriage. The forecast says there is a chance the evening could be stormy, but O'Toole said a rainy wedding day is supposed to bring good luck, and his hunch is that his best friend will make sure that it is so.

On this May 9, she will need no dental hygienist to recommend her second yes.

Sean Kirst is a columnist with The Buffalo News. Email him at skirst@buffnews.com or read more of his work in this archive.