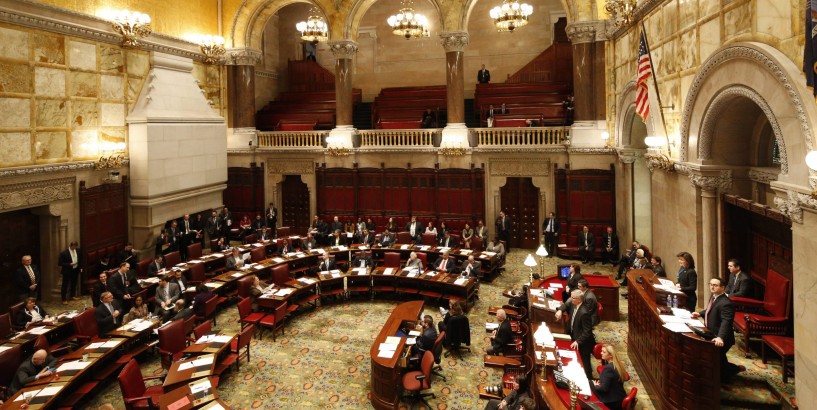 After years of failure in the State Senate, the Legislature in Albany has finally approved the Child Safe Products Act. Gov. Andrew M. Cuomo should sign it.

The law, which initially arms parents with critical information regarding the toxicity of toys and other items, won final legislative approval last month when the Senate, now under Democratic control, joined the Assembly in giving its assent.

It’s been a long haul. The bill was first proposed in 2014 and, even then, New York was behind the curve. Washington and Maine passed their versions of the law in 2008 and other states – including Vermont in 2014 and Oregon in 2015 – have approved similar legislation.

Under Republican control, the Senate had blocked approval of the legislation, though it’s hard to see why. The chemical and toy industries had fought it, but it shouldn’t have been hard for lawmakers of any stripe to know where their loyalties should lie.

Children are among the world’s most vulnerable populations. They require special attention, yet some of the chemicals in their toys are truly dangerous. Four years ago, the environmental health organization Clean and Healthy New York tested children’s products bought at six stores in Erie County. It found problems in at least 12 products, including a toy flashlight and earrings containing arsenic, a doll containing traces of antimony, toy jewelry containing cadmium and mercury, and a toy train containing lead.

Erie County Health Commissioner Dr. Gail Burstein, a pediatrician and a mother, noted in 2015 that those metals are especially harmful to children and infants. The youngest are most vulnerable because of their rapidly developing brains and growing bodies, said Burstein, who supports the creation of this law.

As Burstein noted, children love putting things in their mouths and, because their skin is more absorptive than adults’, they can be at risk from chemicals from a variety of sources. If toxic substances are fat-soluble, she said, they can accumulate in children’s bodies for years.

Known as the “Toxic Toys Bill,” the measure starts with simple disclosure: It requires manufacturers to make known the chemicals in children’s products.

That anyone would resist such disclosure is disturbing. It merely gives parents and other adults a fighting chance to keep their children safe from otherwise unknown dangers.

Starting in 2023, the measure would ban the sale of children’s products containing the most dangerous chemicals, including asbestos, formaldehyde, benzene, mercury and cobalt. All are known or suspected carcinogens. Who would knowingly put products containing such poisons in, on or next to their children? That delay gives the industries affected time to adjust. That’s reasonable.

The bill also creates a mechanism for expanding the list of toxic chemicals as knowledge about risks advance. That, too, is important, given the rate of change in science, manufacturing and research.

We have not been a fan of full Democratic control of state government. The dominance of any one party creates the risk of abuse of power or of simply going too far. In this case, though, Democrats have achieved something worthy and of long-lasting value for all New Yorkers. They can be proud of this bill.

Indeed, Republicans might have made a better case for continued influence in the Senate had they been more interested in serving parents and protecting their youngest constituents than they were in responding to the interests of toy-makers and the chemical industry. In this case, their priorities were badly misplaced.

Cuomo should sign this bill. If he wants to kiss a baby while he’s at it, the message would not be lost.