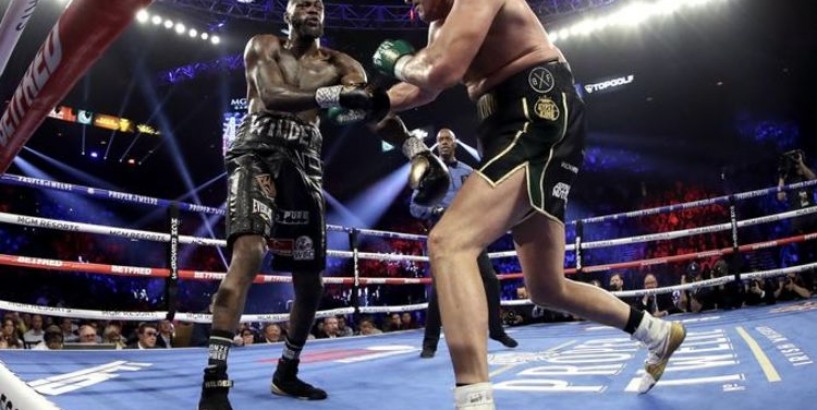 Deontay Wilder has been told by ex- Anthony Joshua opponent Charles Martin that he's going to have to box more if he wants to beat Tyson Fury . The Gypsy King knocked Wilder out in seven rounds last month to claim the WBC world title.

Related articles Anthony Joshua, Tyson Fury and Conor McGregor could all fight in July Coronavirus pandemic 'will derail' Tyson Fury vs Deontay Wilder 3 Martin was on the undercard of Fury vs Wilder 2 and picked up a KO win over Gerald Washington himself.

He watched on as Fury put on an attacking masterclass to stop Wilder and have his corner throw the towel in on the Bronze Bomber.

Wilder was dropped twice en route to his stoppage loss and has since spoken of his desire to get back in the ring with Fury.

JUST IN: Anthony Joshua could fight Tyson Fury next because of coronavirus

Deontay Wilder told by ex-Anthony Joshua opponent what to do to beat Tyson Fury in rematch (Image: GETTY) The two are expected to clash in July in Vegas once again, but Martin, who lost the IBF world title to Joshua back in 2016, says Wilder needs to make changes.

"Well, he just has to go back to the drawing board," Martin told BoxingScene.

"And he needs to be more of a boxer and really not abandon the things that he should be working on and getting sharper at to win fights.

Related articles Boxing news: Anthony Joshua torn apart, Floyd Mayweather comeback axed Anthony Joshua could fight Tyson Fury next because of coronavirus READ MORE Coronavirus pandemic 'will derail' Tyson Fury vs Deontay Wilder 3 "Basically, if he can't box and he isn't using the jab it is just going to be all bad for him again because Fury is a good boxer.

The third fight with Wilder is under threat because of the ongoing coronavirus pandemic and although the clash hasn't been made official, Fury doesn't expect the American to back out.

Deontay Wilder told by ex-Anthony Joshua opponent what to do to beat Tyson Fury in rematch (Image: GETTY) READ MORE Mike Tyson gives blunt verdict on Tyson Fury vs Anthony Joshua "I’m almost sure that he will take a rematch because he’s a dynamite puncher. At any time he can take somebody out," he said last month.

"With that danger, then you’re always in a fight. I’m pretty sure we’ll run it back again if he wants to.

"But if he doesn’t want to, these are my promoters and whatever they want to do, I’m happy with.

"Whoever’s next will get the same treatment, that’s for sure.”

Trending Joshua could be set to face Fury in December, providing the pair get through their likely next bouts in Wilder and Kubrat Pulev.