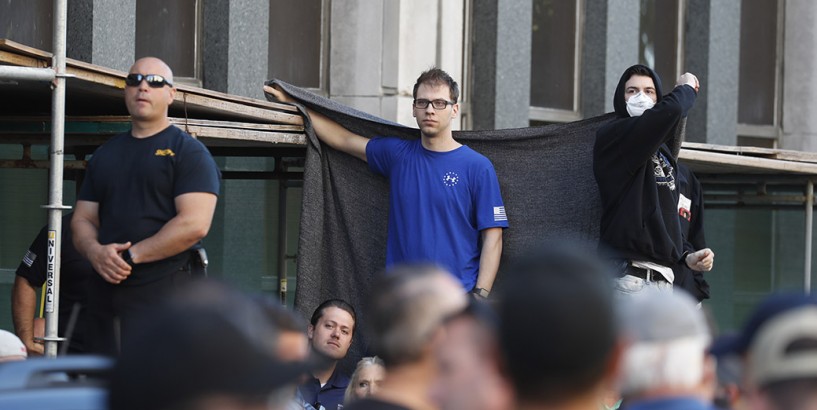 As two Buffalo Police officers were being arraigned on felony assault charges for pushing a 75-year-old protester, about 250 supporters, many of them fellow police officers and firefighters, stood outside on Delaware Avenue to show their solidarity with them.

Many wore Buffalo Police Department and Buffalo Fire Department T-shirts. There were others dressed in civilian clothes. Some wore masks, but many didn't as they stood close to each other in the street.

There was no mistaking that they were there to support Officers Aaron Torgalski and Robert McCabe.

"It is incredible," said John Evans – the president of the Buffalo Police Benevolent Association, the union that represents Buffalo police officers – about the large turnout of supporters. "It is an indication of what a travesty this is – a politically motivated witchhunt."

Friday morning, following the suspensions of Torgalski and McCabe after Thursday night's incident, Evans announced that the union would not cover legal defense costs for any officers in the Emergency Response Team (ERT) or SWAT in relation to the protests that have erupted daily since May 30. Both the officers charged were part of ERT, which responds to riots and other crowd control situations. Then, all 57 members of the ERT resigned from the unit, but not the police department.

Saturday morning, the crowd of supporters first gathered outside Buffalo City Court, along Niagara Square, the epicenter of the protests in the region.

Because of Covid-19, city court arraignments are being held virtually, which meant the officers were physically in the Erie County District Attorney's Office inside the Erie County Court building one block down Delaware, so the crowd shifted there.

Aware of media presence, several people made efforts to block cameras from being able to photograph the officers as they left the DA's office. Some held up blankets. One man raised a black umbrella in front of a news camera that a WGRZ-TV photographer raised above the crowd.

Several people held signs. One read: "Support the people that protect all people."

A small number of counter-protesters appeared as news of the arraignments spread. A few deputies with the Erie County Sheriff's Office, across the street from the courthouse, watched the crowd. A couple of inmates in the Holding Center, also across the street, peered out a window.

Erie County District Attorney John Flynn held a press conference nearby after the arraignments handled by assistants from his office.

“I understand that there were some people outside today who were supporting the two police officers and they’re probably very upset at me," Flynn said. "That’s fine. I get that. I’m a big boy, I can handle that. But when it comes to our job, when it comes to protecting this community, we have to put aside our differences and do our job. So I implore the rank and file of the Buffalo Police Department to think about the oath they took when they were sworn in as police officers and think about what they promised to do to protect our community, to protect our city.”

Flynn predicted defense lawyers will argue the actions of the officers were justified.

At one point, Cariol Horne, a former Buffalo Police officer who has been vocal at many of this week's protests, approached the crowd and sang into a bullhorn. Some shouted at her. Horne, who is black, had a 2006 on-duty confrontation with a fellow officer during a violent arrest. She claimed the white officer was choking a black defendant officers were placing under arrest. The other officer alleged Horne jumped on his back while he was trying to subdue the man. She was fired from her job following an internal affairs review and a disciplinary proceeding.

Later, a black man with a smaller bullhorn yelled at the crowd. A Buffalo Police officer approached him and told him that he needed a permit to use the bullhorn and asked him to stop. The man did so.

After the two officers were arraigned and released on their own recognizance, the crowd cheered, clapped and whistled loudly as they left in a car. A siren wailed nearby and then the crowd dispersed.