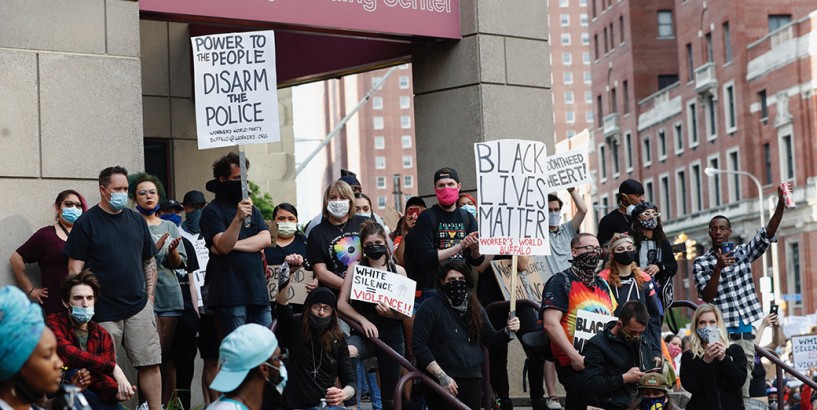 Buffalo Mayor Byron W. Brown met with a coalition of police-reform advocates for more than four hours Saturday afternoon, in the aftermath of a viral incident Thursday in which two city police officers were filmed pushing a 75-year-old protester.

Advocates from Free the People WNY, a four-month-old police-reform group, are calling on the city to overhaul the way the Buffalo Police Department does business, from police presence in public schools to use-of-force regulations.

While Brown did not immediately agree to adopt any of the 13 specific policy proposals the group presented, and declined to comment on specific actions, both he and advocates said they planned to continue "an extremely productive discussion."

"It should not have happened," the mayor said of the Thursday incident. "We will work hard with members of the community to put policies and procedures and additional training in place ... to prevent police brutality and misconduct."

Among other proposals, Free the People WNY is calling on the Buffalo Police Department to ban chokeholds and strangleholds, issue strict guidelines on the use of weapons including tear gas and rubber bullets and improve the way it polices protests in the future.

The organization criticized what it called he police department’s “unnecessary show of force” during demonstrations over the last week, and urged the department to “stand down” its Emergency Response Team, or ERT, which was formed in the aftermath of the 2014 protests in Ferguson.

Advocates are also demanding the immediate termination of police officers with records of abuse, including officers who have killed or injured residents or who have received multiple harassment complaints.

They have urged the city to adopt Cariol’s Law – named for former Buffalo Police officer and whistleblower Cariol Horne – which would require police who witness their colleagues using excessive force to intervene, and would later protect them from retribution.

Over the long-term, the group is asking the city to move to an alternate model of policing, in which officers focus on building community relationships and connect people who have mental illnesses or substance abuse issues with supportive services.

They have also called on the Common Council to reduce the Buffalo Police Department's budget by an unspecified amount, and to redirect the savings toward education and “other basic needs.” That echoes a campaign launched ahead of the Common Council’s annual budget meeting last week, in which hundreds of city residents called and emailed council members with requests to cut police funding.

In a phone interview Saturday evening, Brown declined to identify specific reforms his administration is pursuing, and said he had met with many community groups and activists in addition to Free the People. But he did say he sees a need to increase transparency in the police department and to make changes to its union.

On Friday, all 57 members of the Emergency Response Team resigned after the Buffalo Police Benevolent Association announced it would no longer cover their legal costs in any suit related to the protests. The PBA said the resignations were in support of the two ERT officers suspended for pushing Martin Gugino.

"T he police union put out a bulletin that if those officers continue to perform those duties, they would lose support and representation from the union," Brown said. "I think that is absolutely shameful. Those are dues-paying members.

"So that is a circumstance that is crying out for change. To pressure people and threaten people in the performance of their duties during a time of crisis is absolutely the wrong thing to do."

In a statement, reform advocates said they would "continue to be in close contact with the Mayor’s office to achieve meaningful policy solutions as quickly as possible."