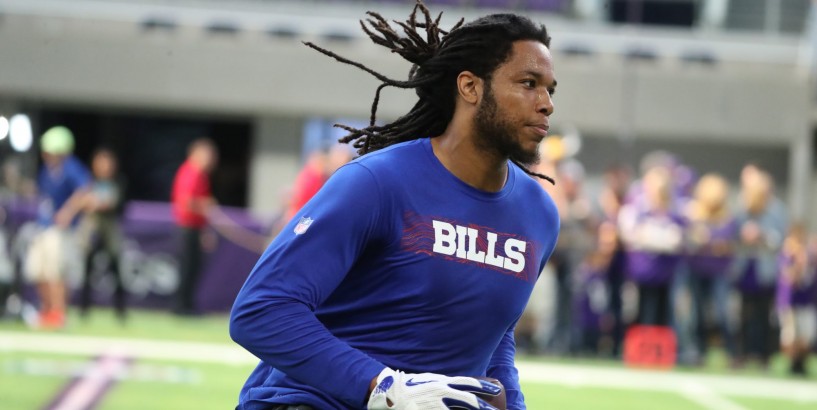 The harsh reality of life in the NFL was spelled out Tuesday for members of the Buffalo Bills.

The release of wide receivers Kelvin Benjamin and Andre Holmes drove home that the league is a bottom-line business. Benjamin, in particular, was not producing on par with his pay, so he was sent packing.

“I appreciate, just like I do every player, what they did. It obviously didn’t work, and those are hard decisions to make because those are human decisions,” coach Sean McDermott said in explaining the moves.

The Bills cut Benjamin, who appeared in just 18 regular-season games for the team, a little more than a year after giving up third- and seventh-round draft picks to acquire him. The 27-year-old had 39 receptions for 571 yards and two touchdowns in those 18 games.

“The important thing for us is that we continue to take swings, and that’s what we did; we stepped up to the plate and you take a swing,” McDermott said. “Some of those are going to work and some of those aren’t. The only way you can get a hit is if you take a swing. … Just as important for us, I believe, is when things are no longer right for us as a football team and where we are and the vision we’re trying to chase, that we move forward. That’s what we did. We wish Kelvin and Andre both the best and their families. We’re going to continue to make every decision that we feel is right in the best interest of this football team.”

Benjamin went unclaimed on waivers Wednesday, meaning he’s free to sign with any team. Holmes, meanwhile, was claimed by Denver. Part of the reason the Bills moved on from both players was to give their younger wide receivers more opportunities.

“That’s a part of it as well. We have young receivers that have stepped up in the past couple of weeks and showed some signs of their potential,” McDermott said. “Our commitment to them is to give them better opportunities — to see them build a relationship with (rookie quarterback) Josh Allen, to see them develop. That’s important as we move forward … that we understand what our young players are, who they are, can they develop? Are they important pieces for us as we move forward in our organization?”

That list of young players starts with second-year veteran Zay Jones, who has actually been the Bills’ No. 1 receiver for most of the season, and continues with Isaiah McKenzie and rookies Robert Foster and Ray-Ray McCloud.

“It's obviously sad to see them go. We wish them nothing but the best,” Allen said. “I'm not in charge of making those decisions, but these younger guys are going to get an opportunity now and we get to see what they can do to help this team win football games. Guys like Rob, Isaiah, Ray-Ray and Zay get to go out there and really show what they can do. They're looking forward to it.”

Benjamin’s release in particular shows just how quickly fortunes can change in the NFL. He entered the season as Buffalo’s No. 1 receiver, with a salary of nearly $8.5 million. A few months later, he’s unemployed.

“You never know when it could be your time,” Allen said. “It's a performance-based league, I guess. I'm looking forward to the guys we've got right now. We're going to be working extremely hard to build on these last four weeks.”

Benjamin drew the ire of Bills fans for what they perceived to be a lackadaisical approach to the game. Veteran receiver Deonte Thompson, however, said Wednesday that wasn’t the case. Thompson, who like Benjamin is from Belle Glade, Fla., said “from the minute he came in the building, he's been a professional.”

“He played through injury, Thompson said. “We played against the Chargers, he had a really bad hit on his knee. He actually wasn't supposed to finish the season, but since we were playing for something, playoff hopes and all that, he stuck it out and put it on the line for his team. That's the kind of guy he is.”

Benjamin’s agent, Todd France, did not respond to a request for comment Wednesday. A report from ESPN’s Adam Schefter said that Benjamin is “not expected to be free very long.”

“I talked with him. He's in good spirits. He knows he'll get another opportunity to go play football again,” Thompson said. “I've been on that end (of being released) before. I was on that end this year. It's the game we play. That's how it goes.”