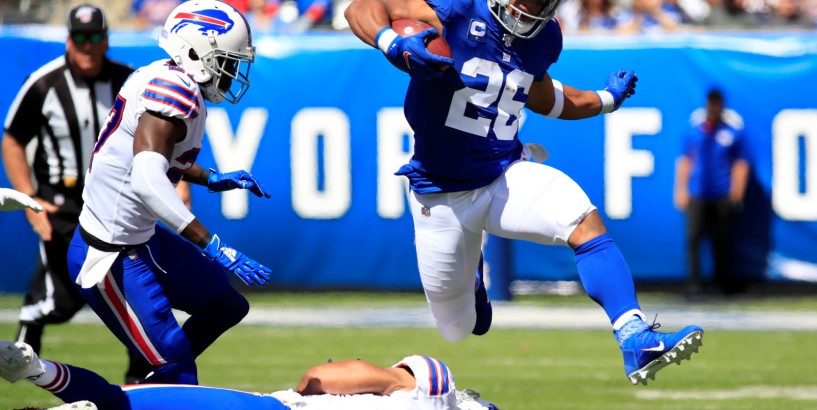 Bills’ defense rights itself after shaky start against Giants

After that first drive, however, they couldn’t have played much better. For the second consecutive week in MetLife Stadium, the defense did its part, helping the Bills to a 28-14 win and a 2-0 start to the season.

Giants star running back Saquon Barkley capped off a shocking, five-play, 75-yard touchdown drive to open the game with a 27-yard run to the end zone, leaving Bills fans to wonder where the dominant defense from the season opener against the Jets disappeared to.

Not to worry, though. The Giants would not score again in the first half.

“We got hit in the mouth, but we were able to come back out there and get some stops for our offense to put up some points,” safety Jordan Poyer said. “Nobody panicked. Got to the sideline, made the adjustments and came back out there next series and did what we have to do. That’s the type of resiliency we have on this defense.”

Barkley started the game with five carries for 60 yards and a touchdown on the Giants’ first six plays. Inexplicably, the Giants seemed to go away from him after that. Barkley got the carry on first down on New York’s next two possessions, but then aging quarterback Eli Manning threw on second and third down. All four of those attempts fell incomplete, as the Bills’ defense forced back-to-back three-and-outs.

That allowed the offense, which had gone three-and-out on its first possession, to find its way. The Bills led, 14-7, by the time the Giants gained their next first down.

[ Plays that Shaped the Game: Josh Allen came through when Bills needed an elite QB play ]

Even when the Giants started to move the ball at the end of the first half, the Bills’ defensed tightened when needed. New York reached the Bills’ 29-yard line at the two-minute warning in the second quarter, but Manning’s pass to Bennie Fowler III was broken up on a devastating hit by safety Micah Hyde. Fowler injured his ribs but remained in the game.

Kicker Aldrick Rosas missed a 48-yard field-goal attempt on the next play.

“We knew we had to get out early on them and force them to be one dimensional and throw the football,” Hyde said. “It’s one thing to actually talk about it in a team meeting and stuff, but it’s another thing to go out there on Sunday and perform and we were able to do that today.”

After the Bills’ punt-coverage unit gave up a 60-yard return to T.J. Jones that set the Giants up at the Buffalo 33-yard line later in the second quarter, the defense again rose to the challenge. After a 12-yard completion to Fowler got New York to the 21-yard line, defensive tackle Ed Oliver deflected a Manning pass and Trent Murphy was able to snag an interception.

The defense added another takeaway in the second half when Poyer hearkened back to his baseball days to track down an interception.

"I actually opened over my right shoulder and I had to baseball turn and get my head around," he said.

2. The Bills put the game out of reach after a costly penalty by the Giants. Buffalo was about to settle for a 21-yard field goal from Stephen Hauschka with 6:47 remaining that would have increased the lead to 24-14, but Giants defensive lineman Dexter Lawrence was penalized for unnecessary roughness after making contact with the head of long snapper Reid Ferguson. That gave the Bills a fresh set of downs, and Frank Gore was able to reach the end zone two plays later.

Marlowe got the start, but Neal came in on the next play. Neal played more of the true slot cornerback role, while Marlowe was the “Buffalo” nickel defender.

“Great job by those guys stepping in, stepping up,” coach Sean McDermott said. “Those guys prepare like crazy. Even last week when Siran went in, he had prepared all week and was ready to go. You saw some of that today, as well. … Just can’t say enough about the way these guys prepare and the work ethic that they take into every week.”

Buffalo Bills are 2-0 after 28-14 win over New York Giants 4. Penalties hurt the offense in the third quarter. Left tackle Dion Dawkins and rookie right tackle Cody Ford each got penalized for a false start before the first play of a possession. That set the offense back, and each time it was unable to convert a first down. The slow third quarter by the offense let the Giants climb back into the game.

The Bills were flagged nine times for 65 yards in the game.

“We hurt ourselves on the first couple drives in the second half and then really down the stretch as well, trying to close the game out,” McDermott said. “We have to be better in that situation.”

5. Rookie defensive end Darryl Johnson Jr. was hurt in the third quarter. After being attended to by trainers on the field, though, Johnson was able to jog to the sidelines. He returned to the game on the next defensive series.

Similarly, offensive tackle Ty Nsekhe was briefly looked at by trainers in the first half, but was able to return to the field a short time later. Nsekhe continued his rotation with Ford at right tackle.

The Giants lost wide receiver Cody Latimer to a concussion in the second half. Latimer, who was questionable for the game with a knee injury, was hit by Poyer at the end of a 9-yard completion that converted a first down. He was quickly ruled out for the remainder of the game.

Newsletters [BN] Blitz Feed your obsession. Start every Monday through Saturday morning with a guide to the latest news from One Bills Drive and beyond.

× You've successfully signed up for this newsletter. Sign Up

6. The Bills’ return game has been quiet the first two weeks without Andre Roberts. Hyde gained just 6 yards on two returns. Like last week, he also let a punt bounce inside the Bills’ 10-yard line, allowing the Giants to be able to down it at the Buffalo 2-yard line. The Bills did not attempt a kickoff return, taking three touchbacks.

7. Tyler Kroft's return is still at least one week away. The Bills' tight end was inactive after coming into Sunday's game listed as questionable. Kroft has been recovering from a broken foot suffered in the spring. He was able to practice on a limited basis all week. The team went with Knox, veteran Lee Smith and rookie Tommy Sweeney at the position.

Knox had one catch for 18 yards in the first half, but had what looked to be a catchable throw from quarterback Josh Allen sail through his hands early in the third quarter. In the fourth quarter, he was called for a blindside block at the end of a 16-yard run by Devin Singletary, turning it into a net gain of just 1 yard.

Knox was active as a blocker against the Giants. He helped spring receiver Isaiah McKenzie’s 14-yard touchdown catch.

“He stayed on his guy and Isaiah made a nice little move there and was able to find his way in,” Allen said. “That’s selfless football. Guys that aren’t getting the ball thrown to them, but they’re making downfield blocks that allow us to score touchdowns.