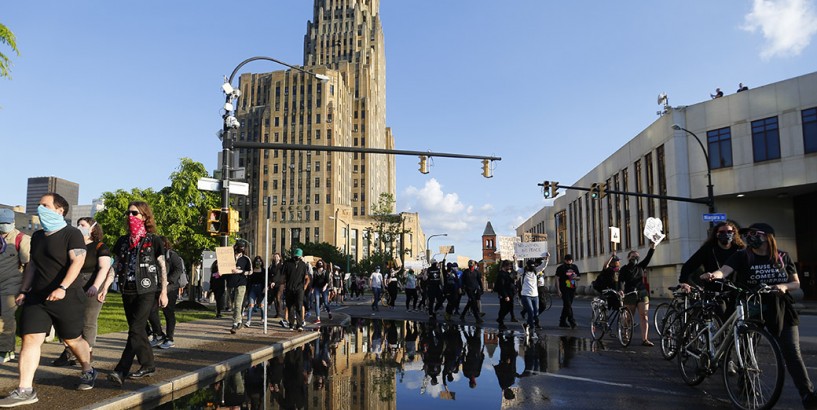 At Niagara Square protests, signs of hope and ‘uncomfortable conversations’

Most passersby responded with honked horns or raised fists. But over the course of a sunny Saturday afternoon in Niagara Square, hours before hundreds arrived for much larger protests, a group of roughly 30 anti-racist demonstrators also saw reminders of what they are up against.

A series of “white guys in trucks” yelled insults at Tim Bushner, a 22-year-old college student who walked a cardboard “BLM” sign in circles around the square. One driver slowed down in front of City Hall to yell “black lives don’t mean (expletive)" before speeding off again.

Shortly before 2 p.m., an older couple appeared with folding chairs and signs that read “all lives matter.”

“You’re missing the point,” called Sharon Hughes, 51, who came from Williamsville to demonstrate with her daughter.

“My friends didn’t want to come,” said Katie, who is 12. “But I really, really wanted to come. I think this is really important.”

The past two weeks have been ones of both enormous hope and enormous discord in cities and towns across the world. The police killing of George Floyd in Minneapolis, Minn., sparked immediate protests against police violence and systemic racism. But well-documented incidents of further police violence, as well as violence and looting by some protesters, appear to have further stoked existing social, political and racial tensions.

That was sometimes evident in Niagara Square on Saturday, where anti-racist and police-reform demonstrators gathered before noon just as a group of police supporters broke up in front of the Erie County Courthouse a block away. Voncille Vanover, a social worker and mother of six, made a long “prayer walk” past the courthouse and around Niagara Square, “summoning angels” to downtown Buffalo.

Vanover, whose 19-year-old daughter attended last Saturday’s protest, said she has grown disturbed by the social rancor she sees.

Protesters at another night of protests in Niagara Square. (Mark Mulville/Buffalo News)

But to Henry Johnson, a photographer and parking lot attendant, a reckoning of some sort is overdue. Several years ago, he said, a neighbor called the police after overhearing an argument between Johnson and his girlfriend. When the officers arrived, he said, they drove their squad cars onto Johnson’s lawn, pepper-sprayed him and beat his legs with batons. Thin scars are still visible beneath the bottoms of his basketball shorts.

Since then, Johnson said he has wondered what leads one person to think his life is more valuable than another. And he has painstakingly instructed his own son, who is autistic, how to interact with police officers.

“It's bigger than life to me, because I almost died here more than once,” Johnson said. “I’m speaking for people that’s not here to speak, their voices can’t be heard ... I speak for them.”

Behind Johnson, a 40-year-old construction worker who asked The News to identify him only as James raised his fist at passing cars. There were a handful of hecklers, and a series of resolute non-lookers who gripped their steering wheels and rolled their windows up against the crowd.

But there were far more city bus drivers who honked their horns, and little kids who flashed peace signs out of car windows. One middle-aged man pulled over, briefly, to praise the protesters as “patriots and heroes.”

Protests continue at Niagara Square in response to the death of George Floyd. (Sharon Cantillon/Buffalo News)

James, who recently moved back to Buffalo from Texas, cheered and fist-pumped with the supporters – but said he still sees more racism here than in the south. He drives by construction sites where every worker is white. He, too, has had run-ins with the cops.

Initially, he said, he came downtown not to join this demonstration, but to confront the officers outside the courthouse.

“I don't want a guy in my community policing me that … doesn’t know what white privilege is,” he said. “You know what I mean? Like how can I explain that to you? A lot of people just can’t accept certain things, I guess.”

Conversations about race and privilege can be difficult, acknowledged Logan Reedy, a 27-year-old teacher who sat in the shade not far off. She held a sign that read “change now, police reform now,” and in smaller print: “black lives matter.”

Minutes before, Reedy received an angry text from an aunt with whom she’d tried to talk about racism. The conversation did not go well. Reedy said it strained their relationship.

“I see racism every day in my community and in my family,” Reedy said. “It’s awful, but it’s so important that we have these uncomfortable conversations.”