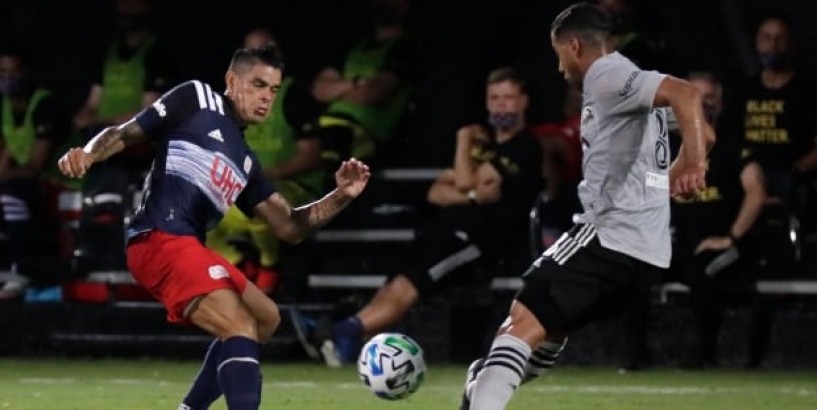 Argentine forward Gustavo Bou scored early in the second half Thursday to give the New England Revolution a 1-0 win over the Montreal Impact in their opening game at the MLS is Back Tournament.

Both teams looked rusty, hardly surprising given the league's four-month hiatus caused by COVID-19. New England had the better of a scoreless first half that saw the Impact fail to test goalkeeper Matt Turner.

Montreal rallied to open the second half and the Revolution needed a fine save from Turner to deny Max Urruti in the 50th minute after Samuel Piette put him in alone for Montreal's first shot on target.

But the Impact surge didn't last.

The stalemate ended in the 56th minute when Bou rounded 38-year-old defender Rod Fanni at the edge of the box and hammered a left-footed shot high over an outstretched Clement Diop. BOX SCORE: Revolution 1, Impact 0 New England had chances to extend the lead but couldn't finish them.

Montreal pressed in the dying minutes but New England, with bodies behind the ball, held firm. Turner had to make a one-handed save in the 96th minute off substitute Ballou Tabla to preserve the win.

The Impact became the first Canadian pro team to resume play in the pandemic, with Toronto FC set to return to action Sunday against D.C. United and the Vancouver Whitecaps kicking off their tournament next Wednesday against San Jose.

Thursday night marked Montreal's first outing since March 10 when it lost 2-1 to CD Olimpia in the first leg of the CONCACAF Champions League quarter-finals at Olympic Stadium. The Buzzer The highs and lows of soccer's return MLS returns to action after poignant moment of silence to protest racial injustice The teams and officials took to the field on a hot night at ESPN's Wide World of Sports wearing face masks, discarding them before kickoff. Players and officials took a knee before kickoff with Impact coach Thierry Henry doing the same on the sideline.

Henry knelt for the first eight minutes 46 seconds of the game, marking the time a Minneapolis police officer had his knee on George Floyd's neck.

Montreal coach Thierry Henry took a knee at the start of the Impact's opening match in the MLS is Back tournament, in honour of George Floyd, a Black man, who died May 25 after a white Minneapolis police officer pressed his knee on Floyd's neck for nearly eight minutes. 1:58 Back in Foxborough, Mass., Gillette Stadium hosted a drive-in viewing party for Revolution fans.

Montreal faces Toronto next Wednesday in the latest chapter of a fierce rivalry. The group games at the tournament count in the regular-season standings with Thursday's result leaving both Montreal and New England at 1-1-1.

Henry recorded his first-ever MLS victory when the Impact met the Revolution on Feb. 29 — just two days short of 19 weeks ago — in their season opener. Montreal rallied from a goal down to win 2-1 thanks to strikes by Romell Quioto (37th minute) and Urruti (80th).

Revolution designated player Gustavo Bou scored the lone goal as New England beat the Montreal Impact 1-0 in both teams' first game of the MLS is Back tournament. 1:17 The hiatus allowed both clubs captains to return from injury

Montreal's veteran Finnish defender Jukka Raitala was back from a fractured right fibula sustained in CONCACAF Champions League play ahead prior to the season opener. Defender Rudy Camacho also returned from a knee injury.

New England playmaker Carles Gil was back after missing the first two games of the season with a foot injury. The Spaniard was named MLS Newcomer of the Year in 2019 when he led his team with goals (10) and assists (14).

Victor Wanyama, signed nine days before the league shut down in March, made his MLS debut for Montreal. The former Spurs, Southampton and Celtic midfielder showed his physicality in the fifth minute, bowling Gil over from behind.

Neither goalkeeper was called into action until the 19th minute when Diop was forced to make a diving save to get a hand on a Gil shot through traffic. The Revolution kept up the pressure, penning the Impact in its own end.

Revolution goalkeeper Matt Turner stopped Ballou Tabla's drive on the second-last play of the match, to preserve New England's 1-0 win over Montreal in both teams' first game of the MLS is Back tournament. 1:36 Ecuador forward Cristian Penilla came close in the 34th minute, driving past two Montreal defenders before sending his shot just wide. Minutes later, the Impact defence was breached again but Gil could not get a shot off.

Diop almost gave a goal away when he came well out of his box in the 40th minute in search of the ball, only to have a New England attacker get there first. The ensuing goalbound shot from Bou was headed away by Impact defender Luis Binks, saving Diop's blushes.

Bou shot wide after a fine pass from distance by Scott Caldwell split the Montreal defence in first-half stoppage time.

Montreal brought on Zachary Brault-Guillard for Nigerian Orji Okwonkwo to start the second half. Bojan, Montreal's Spanish star midfielder, had a quiet first half and was replaced in the 57th minute.

New England came close to doubling its lead in the 63rd but a sliding Adam Buksa could not get a boot to Penilla's low cross. Bou failed to find Buksa at the far post in the 83rd minute.