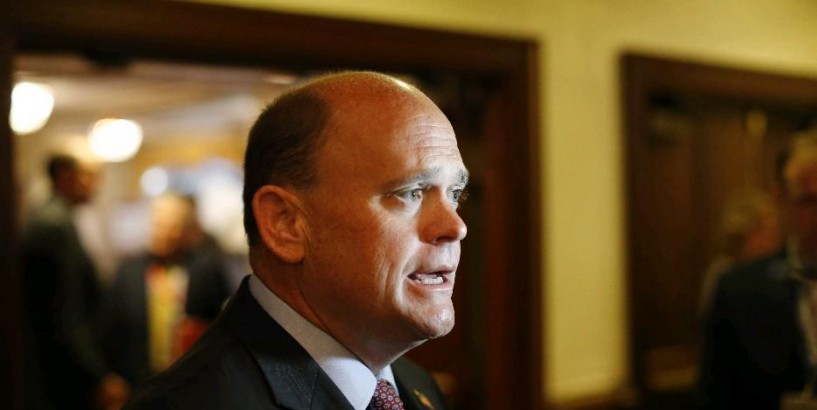 WASHINGTON — A partial government shutdown entered its 13th day Thursday, prompting two of the region's three House members — including Republican Rep. Tom Reed — to call for solutions that don't exactly comport with President Trump's insistence on a wall at the Mexican border.

Reed, the co-chair of the bipartisan Problem Solvers Caucus, suggested ending the government shutdown by combining increased funding for border security with broader immigration legislation. That bill would include a solution for the "Dreamers" — undocumented young people brought to America illegally by their parents — as well as provisions addressing farm labor and other immigration issues.

"I ask my colleagues on both sides of the aisle to put aside the partisanship and the divide that the border wall has created, and really focus on what we can come together on and agree on what needs to be done in terms of border security as well as fixing the broken immigration policies that got us here," Reed said.

Meantime, Rep. Brian Higgins said the new Democratic House, which took office Thursday, should simply pass a funding bill that the Republican-led Senate passed late last year in an effort to end the shutdown. That bill, which the House was scheduled to take up late Thursday night, would fund government agencies through Sept. 30 while funding the Department of Homeland Security for about a month, giving Congress more time to agree on border security funding.

"This is not about border security money," said Higgins, a Buffalo Democrat. "This is about the president being backed into a corner on the issue of the wall."

Trump continued to stand firmly in that corner Thursday. He appeared in the White House briefing room late in the afternoon with leaders of the National Border Control Council, the union representing border patrol agents, who echoed what the president had to say.

Although at one point Trump said he was seeking "a barrier" of some sort, he later said: "Without a wall, you can't have border security. It won't work."

But Reed, normally a strong supporter of the president, told reporters this week that there's too much focus on a physical wall stretching from the Pacific Ocean to the Gulf of Mexico.

Instead, Reed said that in searching for a solution to undocumented immigrants flooding over the southern border, the federal government should ask and answer a series of questions.

Noting that the government has already studied the border enough to answer that question, Reed said suggested letting those who have studied the issue decide where a wall is best and where it is not necessary.

Reed also noted that the very term "border wall" had become toxic to Democrats, meaning they will be unlikely to give in to Trump's demands. That's why Reed suggested broadening the debate and trying to solve the border funding issue in combination with larger immigration issues.

"I think there is a natural deal here where both sides would be able to declare somewhat of a victory," Reed said.

As he focused on the prospect of such a larger deal, Reed planned to vote against the narrower Democratic measure to fund and reopen the government.

Rep. Chris Collins of Clarence — one of Trump's strongest congressional supporters — also planned to vote no on the Democratic measure.

“Given recent events at our nation’s southern border, it is abundantly clear that our country is in desperate need to implement stronger security measures,” said Collins, a Republican. “House Democrats explicitly exclude any funding for President Trump’s strong security measures, which would effectively put a stop to our country’s illegal immigration crisis and further protect American citizens."

Collins urged Nancy Pelosi, the new Democratic House speaker, and Senate Democratic Leader Charles E. Schumer "to stop the political games and realize that border security is important to this nation, and work with President Trump to simultaneously secure our borders and end this partial government shutdown.”

To hear Schumer tell it, though, the shutdown rests on the shoulders of the president.

A day after meeting with Trump, Schumer, a New York Democrat, said: "On multiple occasions yesterday at our meeting, I asked the president to give me one good reason why he should keep large portions of the government shutdown while we have a separate debate about the border. He couldn’t name one."