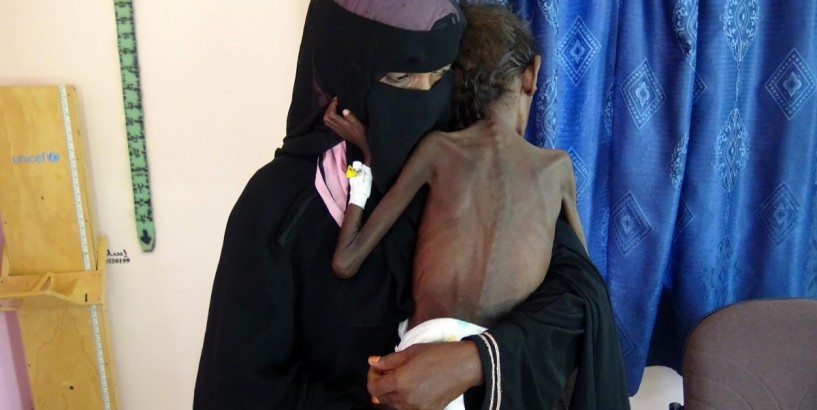 United Nations: Yemen needs more aid than Syria for first time December 6, 2018 at 3:28 am | Published in: Middle East , News , Syria , UN , Yemen EDITORS NOTE: Graphic content / This picture taken on November 22, 2018 shows Yemeni mother Nadia Nahari holding her five-year-old son Abdelrahman Manhash, who is suffering from severe malnutrition and weighing 5 kilograms, at a treatment clinic in the Khokha district in the western province of Hodeidah. - As many as 85,000 infants under the age of five may have died from starvation or disease since 2015 in war-ravaged Yemen, humanitarian organisation Save the Children said on November 21, basing its estimate on UN-compiled data, which has warned that up to 14 million people are at risk of famine in Yemen where Saudi-backed forces are battling Iran-aligned Huthi rebels. (Photo by - / AFP) (Photo credit should read -/AFP/Getty Images) December 6, 2018 at 3:28 am The United Nations said on Tuesday that Yemen will need more humanitarian aid than Syria for the first time next year, 2019.

A report issued by the United Nations Office for the Coordination of Humanitarian Affairs (OCHA) said the international organization needs more than $4 billion to provide basic aid to Yemen in 2019 compared to $3.5 billion needed for Syria.

“The situation in Yemen has dramatically deteriorated and is rapidly worsening,” it said, noting that a majority of the population is facing food deficit.

More than one-third of the country’s 24 million people suffer from extreme poverty, the report said.

According to the report, facing humanitarian crises in various parts of the world next year will require $ 25 billion.