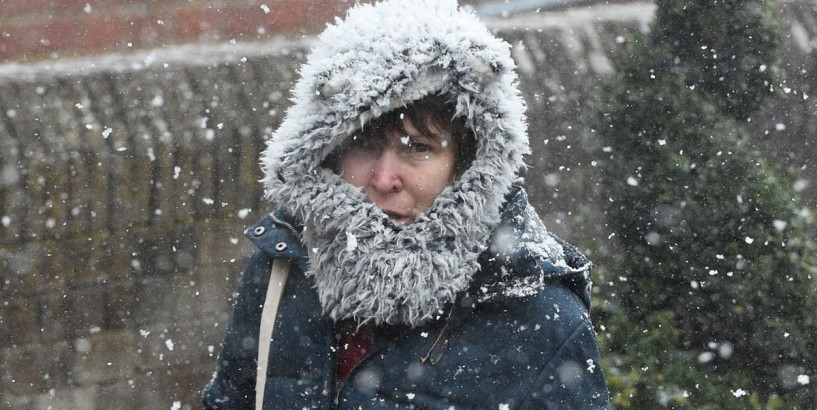 Britain faces snow and ice as well as subzero temperatures, heavy rain and tidal flooding as a bitter weather front moves in. Up to an inch of snow is due before the end of the week, while large swathes of the country are also being told to prepare for treacherous icy surfaces set to cause "tricky driving first thing".

Meanwhile, the second highest tides of the year is expected today, meaning some "tidal flooding" is on the cards, particularly in coastal areas.

The Met Office has issued two yellow weather warnings for snow and ice on Wednesday and Thursday - with much of northern England, Scotland and Ireland affected.

The warnings, in place from 9pm tonight until 10am on Thursday, "may bring travel disruption" with wintry showers expected to fall as "sleet and snow even to low levels", the national forecaster warned on its website.

Further rainfall will also mean wet surfaces "with icy stretches expected to form" leading to travel issues for those commuting to work on Thursday morning.

Railways and roads are likely to be impacted and the Met Office is also warning people about the increased potential for slips and falls.

Met Office meteorologist Clare Nasir warned Wednesday will be noticeably colder than yesterday, particularly "away from the south" where more cloud remains, as does a "little rain".

She said: "Generally speaking, it's showers today and a strong wind."

The combination of wind, high tides - "the second highest tides of the year" - and low pressure "sitting out towards the north Atlantic" means some Brits could see "coastal over-topping and even some tidal flooding", she continued.

Though this will be confined to those in the north and west who are "exposed to that breeze".

Ms Nasir went on to say rain showers on Wednesday morning will be moving up towards the far north, where it will be met by snow above two to three hundred metres.

Though, inland, including the Midlands, "will see sunshine to start the day" and the majority of the early "patchy rain will clear for some brighter skies emerging" as Wednesday progresses.

However, the forecaster said into the afternoon further showers will develop and move inland, meaning "no-one really is immune" and could lead to coastal flooding.

And with high tides expected from lunchtime in the west, high waves are also likely "so there is a risk if you are stepping out along the coast".

"That strong wind continues, those showers continue, and temperatures will be lower across Scotland, northern Ireland and northern England," said Ms Nasir, who predicted temperatures during the day in those areas would sit at 7-9C.

And while elsewhere could see 11-14C the brisk breeze will be felt "everywhere" as the "air turns even colder and a widespread frost" forms and more rain arrives in the evening and into Thursday.

"We are likely to see those showers turn readily to snow again above around 150m," she continued. "But associated with that cold air and then any heavy bursts even at lower levels and certainly some tricky driving first thing [on Thursday]."

The briskest air will be likely in parts of Scotland as well as Cumbria, Pennines, Northumberland, Tyne and Wear and east Yorkshire, "so it is going to be a cold night" for many.

Wednesday overnight into Thursday will see temperatures "fairly subzero across the north and the east", the forecaster added.