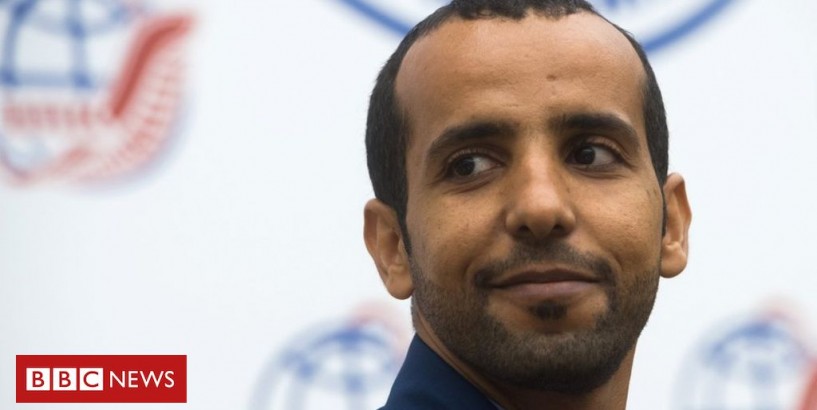 What you need to know

He has also long been inspired by the ambitions of UAE Founding Father Sheikh Zayed, who famously met with US astronauts in Abu Dhabi in the 1970s.

But with no Emirati space programme at that time, he settled for taking to the skies as a pilot. After studying aviation at university, Hazzaa joined the armed forces and worked as a military pilot, flying F-16 fighter jets.

It was not until years later that he realised his dreams of space travel could become a reality. How did he become an astronaut?

In December 2017, the ruler of Dubai and prime minister of the UAE, Sheikh Mohammed bin Rashid Al Maktoum, issued a public call on Twitter for young Emiratis to register for the UAE Astronaut Programme.

More than 4,000 people applied to be in with a chance of becoming the first Emirati astronaut.

Hazzaa and fellow applicant, Sultan Al Neyadi, were selected as the final two after a series of interviews and medical and psychological tests. You might like to watch Media playback is unsupported on your device Media caption Inside the SpaceX Dragon Capsule that docked on the ISS

Sheikh Mohammed described the pair as representing the "pinnacle of the UAE's ambitions".

History professor Jörg Matthias Determann, author of Space Science and the Arab World, said the founding of the UAE at the height of the US Apollo space programme had inspired Emirati leaders.

"This was the high time of US success in particular. The United States itself was trying to make the most of this great achievement by following up with a great publicity campaign."

"The Apollo achievements, they really coincided with the founding moments of the United Arab Emirates." Image copyright PA Media Image caption The Apollo mission to the Moon inspired the UAE's space programme

Dubai's Mohammed bin Rashid Space Centre announced in April that Hazzaa had been chosen as the "prime astronaut" to make the inaugural journey, and Sultan as the "backup".

Hazzaa will travel to the ISS with US astronaut Jessica Meir and Russian astronaut Oleg Skripochka for his eight-day mission.

While aboard the ISS, he will carry out scientific experiments and present a tour of the station in Arabic for viewers back on Earth.

"I'm looking forward to coming back with knowledge and experience and to sharing it with everyone," Hazzaa said.

"By living in the International Space Station... it will give us more knowledge and more understanding of how we can go beyond this. To go to the Moon and to Mars eventually." What will he take into space?

Hazzaa said he will bring a family photo to the ISS and a UAE flag.

He will also carry a photograph of the meeting between Sheikh Zayed and the Apollo astronauts. "This is one of the pictures that inspired me and today I am living this dream," he said.

The former pilot is also reported to be bringing seeds and a copy of Sheikh Mohammed's book, My Story.

Emirati food has been prepared for his trip, including balaleet - a UAE speciality of sweetened vermicelli served with an omelette - that he plans to share with the other astronauts.

Hazzaa said the mission is a "huge responsibility" but that by taking the UAE's first trip to space he hopes to "inspire the next generation" of explorers. Related Topics