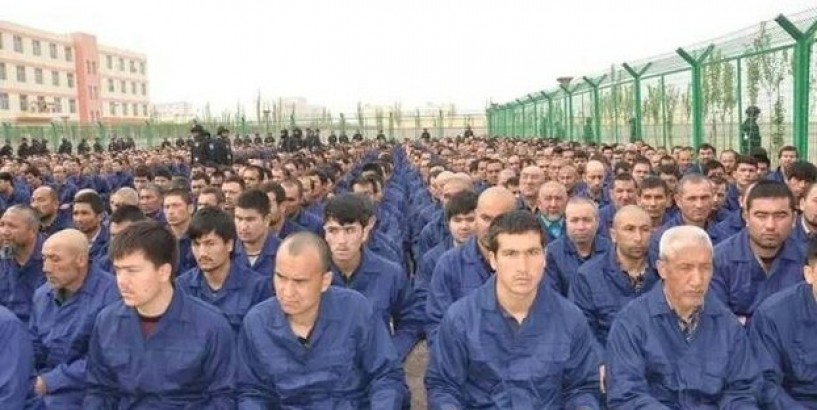 Uyghur Muslim men detained in a "re-education" concentration camp in the Xinjiang region of China. Turkey has demanded that China close its “re-education” camps which has forcibly detained Uyghur and other Turkic Muslims, after reports of the death of a prominent Uyghur musician.

Abdurehim Heyit is believed to have been serving an eight-year sentence in the north-west region of Xinjiang, where at least one million Uyghur Muslims have been detained according to the United Nations (U.N.).

A statement issued by Turkey’s foreign ministry said Uyghur Muslims were being subjected to “torture” in “concentration camps”.

Uyghur and other Turkic Muslim minorities have been under draconian surveillance by the Chinese authorities.

A significant number of Uyghurs have fled to Turkey from China over the last five years.

To date, no Muslim-majority country has publicly condemned China for its oppression of the Uyghurs, which could be due to their economic dependency on the Asian superpower.

In a statement issued on Saturday, the spokesman for Turkey’s foreign ministry Hami Aksoy said: “It is no longer a secret that more than a million Uyghur Turks exposed to arbitrary arrests are subjected to torture and political brainwashing.

“The reintroduction of concentration camps in the 21st century and the systematic assimilation policy of Chinese authorities against the Uighur Turks is a great embarrassment for humanity.”

He also called on UN Secretary General Antonio Guterres “to take effective steps to end the human tragedy” in China, explaining that the reports of Mr Heyit’s death “further strengthened the Turkish public’s reaction to the serious human rights violations in Xinjiang”.

The Associated Press Quote: d a statement from China through its embassy in Ankara which called on Turkey to withdraw its “false accusations”.

“We hope the Turkish side will have a correct understanding of the efforts made by China to legally deploy measures to effectively fight terrorism and extremism, withdraw its false accusations and take measures to eliminate their harmful effects.”

China claims that the concentration camps in the Xinjiang region are “vocational education centres” designed to counter the region of terrorism.

Those who have spent time in the concentration camps have said they were forced to undergo an intensive indoctrination programme, which urged them to renounce Islam and adopt Chinese Communist beliefs.

Many former Uyghurs who were detained have said that Muslim inmates were forced to drink alcohol, eat pork, dance with each other’s spouses and sing Communist anthems when they wake up and before the go sleep.

Abdurehim Heyit Amnesty International have stated that they were very concerned about reports of his death, which has not been officially confirmed.

Heyit was a popular player of the ‘Dutar’, a two-stringed instrument that is considered very hard to learn.

In the past, he was celebrated across the whole of China.

He was reportedly detained because of a song he performed entitled “Fathers”.

The song took its lyrics from a Uyghur poem calling on the youth to respect the sacrifices of the previous generations.

However, it was three specific words in the poem – “martyrs of war” – which led Chinese authorities to conclude that Heyit posed a “terrorist threat”.